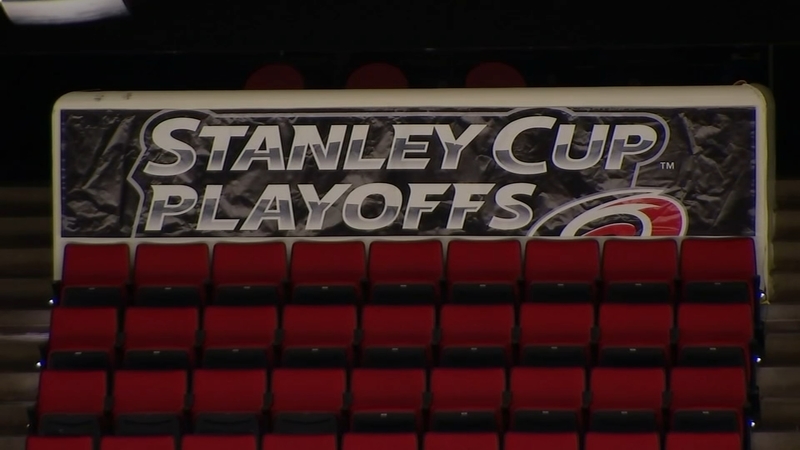 RALEIGH, N.C. (WTVD) -- The Carolina Hurricanes won 36 games during the regular season. Unlike AP courses, they get zero credit for that entering the playoffs. Everyone's back at zero and only one team can finish the race to 16.

"You get re-energized by this time of year, and it's just so much fun to play in these games," Jordan Martinook said.

With a 56-game grind behind them, it's on the Canes now to show that their first-place finish in the East was no fluke. The proof is in the playoffs.

"Everybody's now hunting each other. That's the way we have to play anyway, so I think you're kind of referring to it as if we would be the hunted but I think we feel the other way around. When we're doing what we do that's how we play," head coach Rod Brind'Amour said Thursday.

Martinook was succinct, too.

"We put in a ton of work to get to where we are and I think if you asked everybody in our room the end goal is to win the Stanley Cup," he said. "It doesn't matter if you're the underdog or the top dog, we've got one thing on our mind."

Though they are certainly supremely skilled, it's the Canes' compete level that separated them this year, a tribute to their head coach, according to Martinook.

"We were in every single game and we could have been on the other side of the ones that we lost," he said. "It's a big confidence builder."

Brind'Amour is not one to sing his own praises but agreed about the notion.

"That little margin, that's where coaching, I think, comes in," he said. "You have a good staff, good people getting guys to get that extra mile, that's what it really comes down to."

It's the Canes' third consecutive year in the postseason. That is a first since relocating from Hartford. That experience is surely helpful but no guarantee of anything. Ask Dougie Hamilton.

"I don't know if it matters, to be honest," Hamilton said. "I think obviously leadership is huge, I think, to help you through that stuff, and we got guys who have been through it."