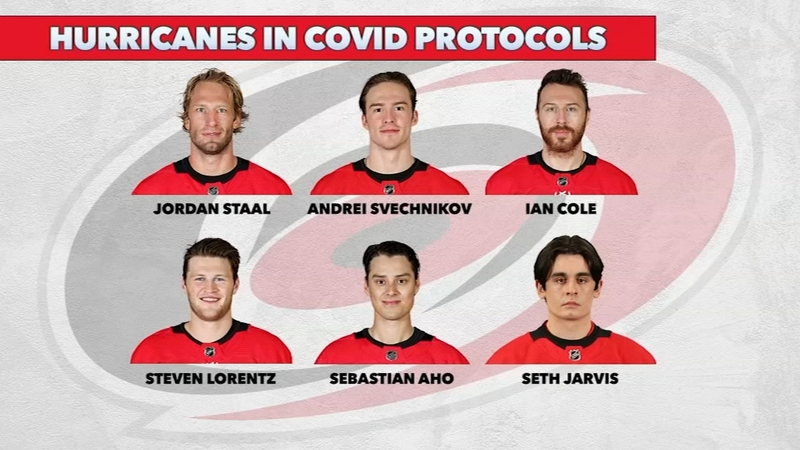 RALEIGH, N.C. (WTVD) -- The NHL has postponed Monday night's Hurricanes game in Minnesota because of COVID-19.

Four Hurricanes have been added to the league's COVID-19 protocol.

Captain Jordan Staal along with fellow forwards Andrei Svechnikov and Steven Lorentz and defensemen Ian Cole are all stuck in Minnesota where they must quarantine.

The NHL's second Star of the Week after a sizzling start to December, Sebastian Aho, along with rookie Seth Jarvis and a member of the training staff are stuck in Vancouver.

Head coach Rod Brind'Amour is beyond frustrated, addressing the media before the news broke about the four additional positive tests.

"I think before we were worried about the sickness part of it, Brind'Amour said. "That's not even the issue. They are not getting sick, but they are paying the price for it, right? They have to just sit there. Super frustrating, especially when it happens on the road and then obviously in another country because of different rules."

Defenseman Jaccob Slavin said he was worried about being home for the holiday.

"My mindset toward the end of the road trip was to just get out of Canada, so you don't have to quarantine for 14 days and be home at Christmas with the family," Slavin said.

This won't be the last COVID case for the Canes. Especially considering the amount of travel, which is where Brind'Amour thinks the danger lies.

"You go on long road trips and it pops up. You're on a plane stuck together for five, six hours at a time. I think this is where this stuff probably happens," he said. "At the end of the day, everyone did what we had to do. Got vaccinated, did our part. I don't know what else that there is to do."

How many games will be affected is anyone's guess. Carolina is supposed to host Detroit on Thursday. Brind'Amour said it is not as easy as just calling up players from the farm club in Chicago.

"There's a lot of other parts involved," he said. "Guys we can and can't bring up based on cap issues and the whole nine yards, so. kind of limited, all over the map to be honest with you."
Report a correction or typo
Related topics:
sportsraleighcarolina hurricanescoronaviruscovid 19
Copyright © 2022 WTVD-TV. All Rights Reserved.
TOP STORIES
Smith, Raanta, Hurricanes top Rangers for 2-0 series lead
1 person in hospital after shooting overnight in Raleigh
Canes fans pile into PNC for Game 2 despite COVID resurgence
Parents share mixed reactions over plans for boosters for children
Fayetteville PD on track to full staffing; what about Durham, Raleigh?
Mail delays blamed on dog, owner claims case of mistaken identity
Body found on the bank of the Tar River in Edgecombe County
Show More
Wake Schools bus driver charged with driving bus while impaired
'Thrilled to death': Princeton man wins Cash 5 jackpot
Raleigh breaks heat record set in 1938
Raleigh resident from Buffalo, NY weary one week after massacre
Judge: COVID-19 asylum restrictions must continue on US-Mexico border
More TOP STORIES News