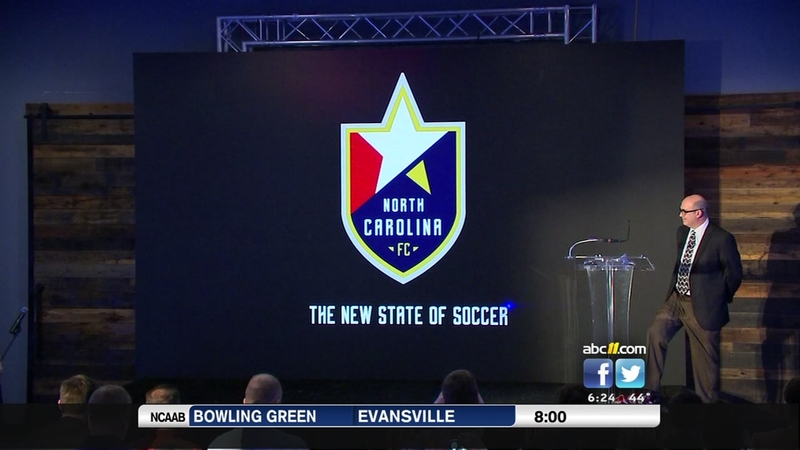 RALEIGH (WTVD) -- The Carolina Railhawks announced major changes in an event Tuesday in downtown Raleigh. Owner Steve Malik and President and General Manager Curt Johnson called it a "new state of soccer" which includes a rebranding of the team.

The Railhawks will now be known as North Carolina FC. Their new crest is inspired by the North Carolina flag with the official colors being "Atlantic Blue," "Cardinal Red," and "Southern Gold." The FC is flanked by two airplane wings, a nod to the "First in Flight" slogan.

Malik also announced a campaign to become a Major League Soccer (MLS) franchise within the next 12 - 18 months. The team said they have had discussions with MLS executives and had a market study done for the Triangle.

"We feel we are well positioned for this," Malik said. "The market is ready for an MLS team based on our geographical location, population growth, dynamic economic environment and significant soccer participation."

Malik said they are planning to finalize a location and begin construction on a new 20,000+ seat stadium within the next year. More details will be unveiled in 2017. MLS requires a stadium of that size. The budget for the stadium is around $150 million.

Malik also said he wants to pursue a first-division National Women's Soccer League team. He hopes to have it within the next 3 - 6 months.

Repeatedly stressed so far today: the multicultural and diverse nature of the soccer and general community here in NC.

"We have seen tremendous success in North Carolina with women's soccer," Malik said. "The numerous accomplishments of local college programs, paired with the continued success of the USWNT, have driven interest in women's youth programs. We feel the time is right to bring the highest level of women's professional soccer to the Triangle."

North Carolina FC is launching a membership program which is included in all season ticket plans or can be purchased separately. Some benefits include priority preference on seat selection in the new stadium as well as special game day experiences.