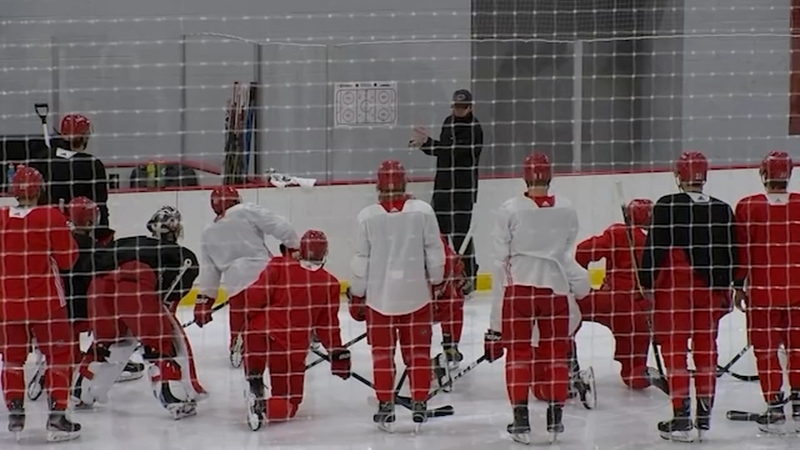 RALEIGH, N.C. (WTVD) -- Tonight should be the Carolina Hurricanes home opener at PNC Arena but instead, the team is dealing with the effects of COVID-19 with five players on the protocol list, a shut-down facility and no set return date.

"I think we were just kind of getting rolling and obviously depending how long we're out for not being able to practice kind of determines that," said Hurricanes head coach Rod Brind'Amour. "We're business as usual as far as today we had a practice, but it was practice on Zoom and we got that done. Now they've got to figure out a way to stay in shape on their own. (Strength and Conditioning Coach) Bill Burniston has been out traveling around dropping bikes off. We're making the best of the situation."

The team has had as many games postponed as it has played. Brind'Amour said his team has been following all of the NHL COVID-19 protocols and isn't sure how this happened.

"I think they've done the best they can," Brind'Amour said. "I think everybody has to be quite honest. There is so much unknown, and you always want to, I think, err on the side of caution, and I think we've done all the protocols. We've tried. I think we've done a great job. Obviously, it didn't matter. It got into our room."

Hurricanes General Manager Don Waddell said the focus is on getting the virus "out of the locker room."

"The league isn't going to care about who's out," Waddell said. "From our end, we know the games we're canceling we're going to have to fit into a real tight schedule. It has nothing to do with the quality of players, the concern is when you have that many players at one time that are either positive or in the contact tracing then the fear is it could come through the locker room, and that's why the league made the decision with our doctors, the league doctors, that it was better to take these days and shut it down. Let's get it out of the locker room so that we can resume our schedule here in the near future."

Right now, the NHL isn't funding any of the tests. The league set up PCR tests for teams, which they pay for and that take at least 24 hours for results -- a time frame where the virus could spread. Waddell said the Hurricanes just added their own rapid testing machines inside PNC Arena.

"We will have to use it when we come out of this quarantine," Waddell said. "As far as for long-term what the plan is for the NHL, they haven't said this is something that we're going to do, but I know the machines have been installed, and we have them now in PNC Arena, and we will see what protocols the league sets up going forward."

Brind'Amour said the adversity can help the team become stronger. But for now, it's just wait and see.

"It really just comes down to doing it right as best you can, and that's kind of what we've always preached anyways," Brind'Amour said. "We'll see how this works out. I believe in the group. I think we can kind of get through this. I think we'll be stronger in a lot of ways because this isn't ideal for anybody. We've got guys sitting in Nashville in a hotel room that can't leave their room. It's brutal. I feel for these guys."