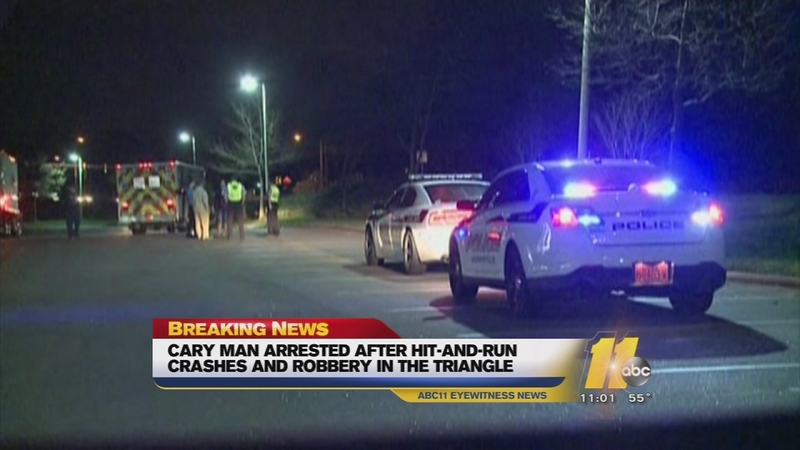 DURHAM (WTVD) -- A Cary man has been arrested and charged with 21 offenses in connection with a robbery and several hit-and-run traffic accidents on Dec. 9.

Eric Jerome Nguyen, 27, of Cary appeared in Court Tuesday. It took the judge around five minutes just to read all of his charges. Nguyen told the judge he wanted to say something at the end. "I'm sorry," he said.

He's been charged with two counts of attempted first-degree murder, one count of common-law robbery, two counts of malicious assault in a secret manner, two counts of assault with a deadly weapon with intent to kill, seven counts of hit-and-run, two counts of damage to property and five counts of reckless driving. He was placed in Durham County Jail without bond.

Officers responded to a robbery call in the 600 block of Morgan Street at 4:42 p.m. on Dec. 9. A 26-year-old woman was getting in her car when a man punched and kicked her, knocked her to the ground and took her keys and vehicle. The suspect hit a vehicle as he was leaving in the victim's red Honda Civic.

During the next hour, officers responded to numerous accident calls involving the stolen red Honda Civic. The accidents involved vehicles, pedestrians and bicyclists and happened in several locations throughout the city. Although it was after dark, the car was being driven with no headlights, according to several witnesses.

The two attempted murder charges involved cases in which the driver of the Civic appeared to deliberately strike a pedestrian on Slater Road and a bicyclist on South Miami Boulevard.

The damaged Honda Civic was later found in Cary.