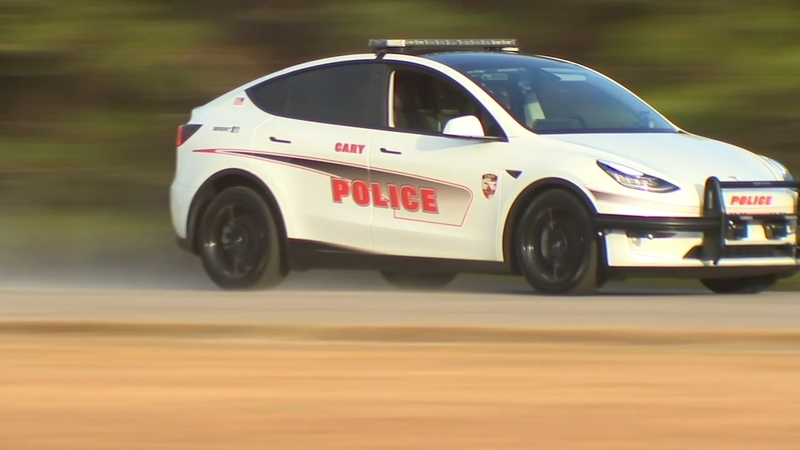 CARY, N.C. (WTVD) -- The Cary Police Department's two newest cars are Teslas. They're being used in the traffic unit.

"We may be able to increase our safety when trying to overtake speeders because these performed so well and accelerate so quick," said Cary Interim Police Chief Terry Sult. "You don't have to reach the higher speeds that you would normally have to do to overtake a vehicle."

The cost is nearly $130,000 for the two cars and upfitting. In addition, it cost another $58,000 for infrastructure, including a fast charger, said Assistant Town Manager Danna Widmar.

Widmar said the Teslas cost more upfront but that over five years, they will save $4,000 per vehicle.

Sult said they'll save on fuel and maintenance.

Widmar said the goal is for the police department to eventually have an all-electric vehicle fleet.

"We have been working diligently to deal with all aspects of our environment," Widmar said. "So air quality, obviously, is a very important one. And so emissions reduction has been kind of added to our portfolio of things that we monitor and watch for and so these vehicles help us significantly with that."

Money for the Teslas comes from the Assets Forfeiture Fund, which includes some money seized from drug investigations.

Community activist Kerwin Pittman said he felt the money could be used in other ways.

"To help individuals in the communities that they are sworn to protect and serve, such as individuals who are dealing with substance abuse issues, individuals dealing with mental health crisis, also as well," Pittman said. "To have the whole town of Cary Police Department crisis-intervention trained."

Sult said all officers do have crisis intervention training.

The Teslas made their debut during a weekend Christmas parade.