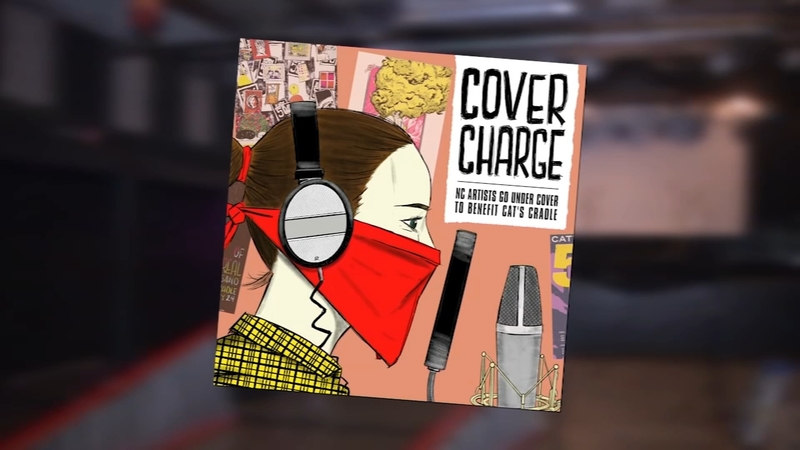 CARRBORO, N.C. (WTVD) -- A group of North Carolina musicians are teaming up to raise money for Cat's Cradle, the popular Carrboro music venue.

"In the music business, we're looking at a year's worth of no shows," said Frank Heath, who has owned Cat's Cradle since the mid 1980s.

Heath explained they initially pushed back three to six months worth of shows at the beginning of the pandemic, but are now having to push back even more.

"You plan for a rainy day and for things going wrong, but not too many people plan for this long of a time," Heath said.

Realizing the need, Florence Dore, a local musician and UNC professor, reached out to Cat's Cradle with an idea about creating an album to raise funds for the club. Twenty-five different artists and bands have signed on to provide content, including Tift Merritt.

The album, titled "Cover Charge: NC Artists Go Under Cover to Benefit Cat's Cradle," features a slew of big names, including Iron and Wine, The Mountain Goats, The Steep Canyon Rangers, and Superchunk.

"They're our friends and they've stepped up big time to help ensure that their relationship between a venue and the people that perform there can continue and can stay strong. So amen to that. It's been great," said Heath.
The combination of pre-sales from the album, a PPP loan and donations from live-streamed shows airing online during the pandemic, Heath is confident about Cat's Cradle's finances.

'I could barely keep up:' Mechanics getting surge of business since stay-at-home order lifted

"We definitely are getting some help from this compilation which has been selling very well - better than what we had even thought was possible," Heath said, as he encouraged people to support other local businesses that are experiencing difficult circumstances.

Merritt is already looking forward to an in-person reunion.

"As a friend, as a person, as a mom, that's where I want my energy to go is that love in our communities that we can bring for each other, and with each other. Because that's what's going to get us through the other side," Merritt said.

"We just hit the jackpot in terms of pulling the right team, the right group of bands, and friends and so on together to reach out and get commitments from artists like Tift who have a little bit higher profile," Heath said.