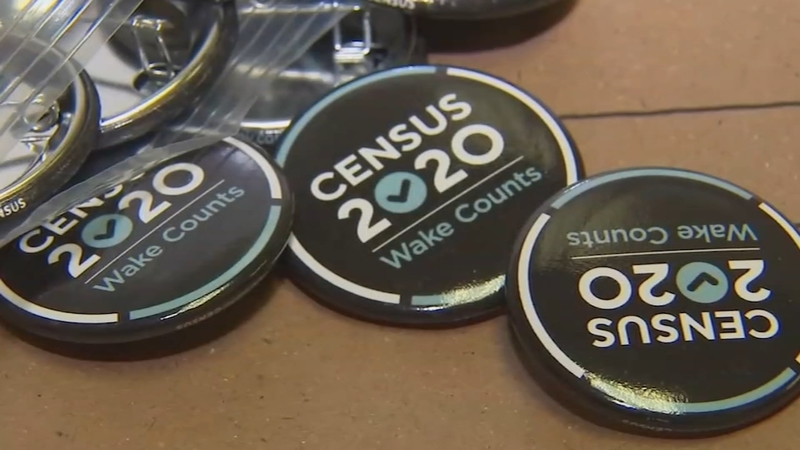 RALEIGH, N.C. (WTVD) -- As the deadline for the 2020 Census looms in the not-so-far distance, North Carolina is predicting it will lose around $7.4 billion a year if more residents don't respond soon.

At 68%, North Carolina is reporting one of the lowest response rates in the country with only five states and Puerto Rico behind it.

"There has been a lot of concern over where we are at currently especially because most North Carolina counties have not reached their 2010 self-response rates," said Stacey Carless, the executive director of NC Counts.

Only 12 out of 100 North Carolina counties had met their 2010 self-response rate as of Tuesday morning. None of the counties are in the Triangle. In fact, Durham County has one of the largest gaps between 2010 and 2020 response rates.

If counties fail to count as many residents as they did10 years ago, they will face a decrease in federal funding..

"Everything that is around you is literally impacted by the census," Carless explained.

A loss in revenue could be especially detrimental now, when many counties are facing significant budget challenges due to the pandemic.

State officials estimate every person accounts for $1,800 in federal funding. If a household of four doesn't complete the census, North Carolina will lose around $7,200 a year and $72,000 over the next decade.

Orange, Wake and Chatham counties rank in the top five for self-response rate across the state this year, however only Chatham County has had the same number of residents respond as it did 2010. Cumberland County ranks 43rd in the state and Durham 45th.

"Once the pandemic hit, of course, a lot of college students went home," Carless said. "So that leaves households that are in college towns that just may not have been counted."

She also said natural disasters in the state have displaced people, slowing participation. Plus, many beach homes in the state are unoccupied after storms and during the pandemic.

Counties in the western North Carolina are reporting some of the lowest response rates. Graham, Swain, Avery and Jackson counties are reporting just around 30% self-participation rate.

"We noticed a trend in rural North Carolina where there is lower census participation rate and that is because of the digital divide, so just lack of internet access or limited internet access," Carless said.

Carless and other members of NC Counts has been working with community leaders across the state to continue to spread the word.

Two weeks ago, Census workers started going door-to-door of homes that have not responded. North Carolina increased its response rate by 8% due to those efforts.

This week Gov. Roy Cooper announced he is partnering with other governors in an effort to push back the Census deadline. Currently, the Census Bureau plans on ceasing collection on Sept. 30, but the bipartisan coalition of governors wants to push this deadline back until October 31.

"By your own calculations made when the COVID-19 pandemic hit, the October 31 date is crucial for the Census Bureau to be able to meet its constitutional obligation and do it in a way that does not jeopardize the public health," the governors wrote in a letter to the U.S. Census Bureau.