'We'll get there:' Effort to repeal HB2 not dead yet 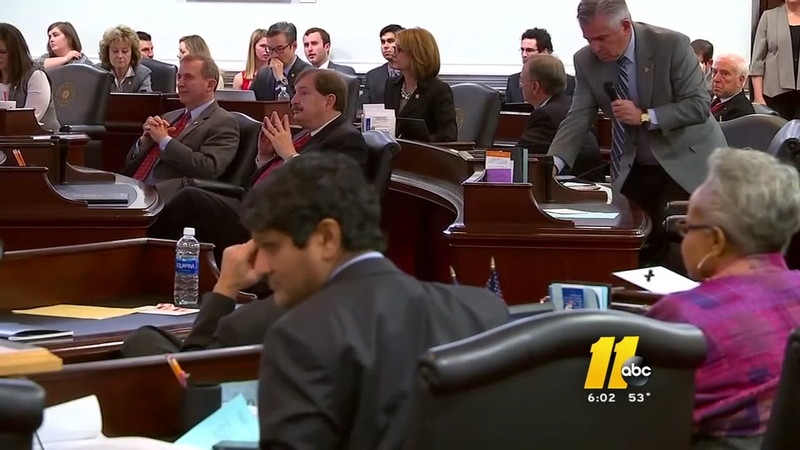 HB2 repeal may not be dead yet

RALEIGH (WTVD) -- Even though the special session needs an autopsy, the effort to repeal HB2 isn't dead.

North Carolina lawmakers, activists and voters spent the day trying to digest the marathon session that took place Wednesday at the Legislature. After nearly 10 hours of negotiations and debate, the General Assembly adjourned with no action.

"You've got opposing political forces that have been at each other's throats for months," Rep. David Lewis (R-Harnett County), lamented to ABC11. "Then we finally, sorta kinda are agreeing to try to move beyond it? We'll get there, I'm very optimistic that we'll get there."

Lewis is the Chairman of the House Rules Committee and a senior Republican leader in the General Assembly. He agreed to meet with ABC11 for an exclusive interview before rejoining his family on a Christmas trip on the west coast (he left them Tuesday night).

RELATED: NAACP TO CALL FOR BOYCOTT OF NORTH CAROLINA AFTER FAILURE TO REPEAL HB2

In our lengthy discussion, Lewis said he was ready to vote to repeal HB2 with no strings attached.

"Charlotte completely repeals its ordinance, we would repeal House Bill 2, and we would begin a conversation on making sure everyone's rights were protected," he said.

There's a lot to learn from day-after autopsy at the @NCLeg. Count on @ABC11_WTVD for context, perspective & understanding of complex issue. pic.twitter.com/9TJVuBr2ke

"I still don't know why Charlotte passed their ordinance to begin with," Lewis said. "We're creating these divisions among people by telling them what they will and will not do -- and I think people don't sense (the divisions) are even there."

The Charlotte City Council did repeal its ordinance -- setting up the HB2 special session -- but the council did not repeal every clause of the ordinance until two days later. Lewis, echoing many of his Republican colleagues, said that miscommunication added to a level of distrust and suspicion already simmering among the caucus.

"By the time it got to the day of session - and I think Charlotte did try to act at that point - we had lost enough members of the caucus who said, 'You know what? We probably need to do this, but we're not going to be told we have to do it now.'"

At Wednesday's session, Republicans spent hours behind closed doors and finally emerged with Senate Bill 4, proposing a full repeal of HB2, plus a "Cooling-Off Period" of at least six months barring any city or town from adding new rules or laws on showers, bathrooms or anti-discrimination.

Sen. Phil Berger (R-Guilford & Rockingham Counties), who authored the bill, said the cooling off period would ensure a full "reset" to stay in place.

"What you've had before you is not some gimmick to create the best of both worlds," Berger said on the floor Wednesday. "It is a good faith effort - given the passion and disagreement surrounding this issue - and it is a reasonable solution that puts HB2 behind us while providing some time to work out some of these broader tensions."

Democrats balked almost immediately, wary that the cooling-off period was an attempt to stifle cities and towns from protecting LGBTQ communities from discrimination.

"They've handcuffed the citizens of North Carolina to exercise their right in protecting the citizens in their towns and counties," Rep. Larry Hall (D-Durham County) told ABC11. "That's what concerns me."

Also on Thursday, some businesses and organizations across the country reacted to the stalled effort to repeal HB2.

In a statement sent to ABC11, a spokesperson for the NCAA asserted, "The NCAA's decision to withhold championships from North Carolina remains unchanged."

Rabbi Jonah Pesner, Director of the Union for Reform Judaism's Religious Action Center, said, "The North Carolina legislature missed an opportunity to right a historic wrong (on Wednesday). Our Jewish tradition teaches that all human beings are created B'Tzelem Elohim, in the divine image (Genesis 1:27)."

Confronted with that opposition, Lewis reiterated his desire and that of the Republican caucus to heal the divides in North Carolina and restore its image.

"If I respect the way you live your life, you need to respect the way I live my life. That kind of balance has been the North Carolina way and we'll get there again," Lewis said.

The General Assembly will reconvene in January for its regularly scheduled long session.