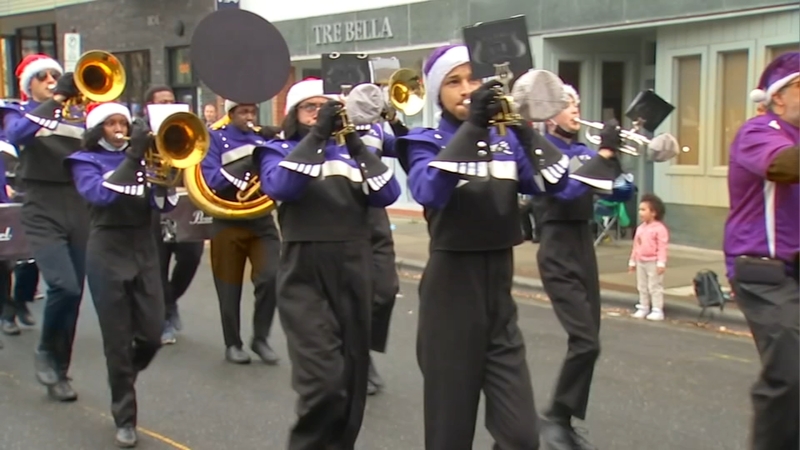 DURHAM, N.C. (WTVD) -- Saturday morning brought a long-awaited opportunity to parade fans like Durham native Joy Campbell, one of the people who lined the route for the return of the Bull City's holiday parade.

"I have a son who's in Hillside's marching band," said Campbell. "He's playing the bass drum and so we come and support every single year!"

Nine-year-old Valentina Brunello was very happy to be out with her family for the parade.

"Because we've been tucked inside for at least a year and a half, and it's been very stressful for all of us," said Valentina. "And now we can actually get out into the open, with real people!"

"We had her birthday party here one year, haven't been back in a few years," said Cara August, Valentina's mother, "And we're just excited to be doing things, be fully vaccinated, kids fully vaccinated."

August shared with ABC11 her favorite memory of parades she's enjoyed in Durham.

"Honestly, the year that there was Black Santa," said August. "I remember jumping and saying, 'oh my gosh!' It just felt really Durham and special."
When asked about safety in Durham, after recent incidents that made headline, August said the thought did not cross her mind, aside from the coronavirus.


"Absolutely! You get your shots, your booster, make sure you take care of yourself, and you should be all well," said Spencer Matthews, who's from Chicago but now calls Cary home. "We went to Cary's last week. But we saw Durham advertised on Channel 11, so we wanted to support this as well."

Still, while outside with a crowd many parade fans took no chances.
"We have our masks. We just want to make sure we're protected, safe, but also have an enjoyable time," said Lauren Matthews. "We gotta keep living!"

Jwisha Stanton, parade fan, spoke for many as the bands and floats, including ABC11's, rolled by.