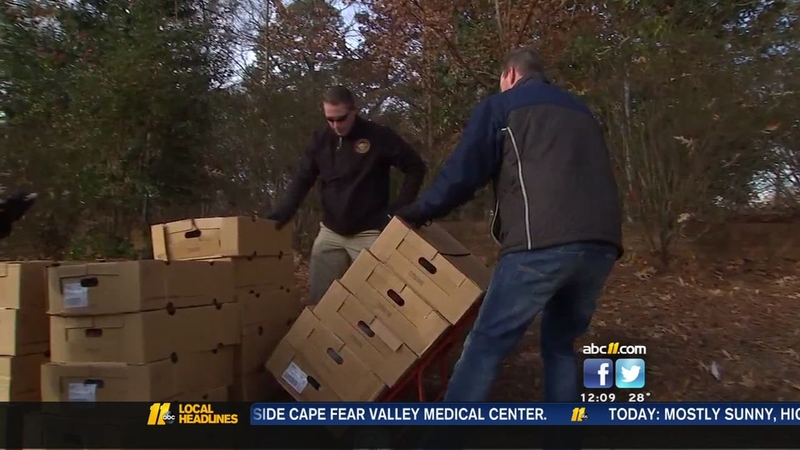 RALEIGH (WTVD) -- For a decade now, a Triangle real estate firm has been sponsoring a turkey giveaway. From its humble beginnings as a tribute to soul singer James Brown, it is now feeding thousands of the less fortunate each holiday season.

Don Walston, the founder of Howard, Perry, and Walston, which is now the Coldwell Banker/HPW franchise, heard a story about James Brown giving away a hundred turkeys in his hometown of Augusta, Georgia during the Thanksgiving and Christmas season. Walston decided to start a similar effort in Raleigh.

The first year he gave away a couple of hundred turkeys. And this year his HPW Foundation handed out 4,000 turkeys in the Triangle.

At Thanksgiving 2,500 turkeys were donated. Friday, another 1,500 were given away for Christmas.

Those turkeys, however, do not go directly to the many hungry families in our communities. Instead 40 charities are given turkeys based on their size and need and they, in turn, hand them out to the needy

"This is the reason for the season. To God be the glory," said Rhonda Reives of the New Bethel Christian Church in Raleigh as she sat in her car in line at the HPW offices on Wade Avenue.

Reives says New Bethel will hand out their allotment of the frozen birds on Tuesday so families can take them home and prepare a traditional Christmas dinner.

She says it's a job she cherishes.

"You try not to get emotional but there's some days you just can't help it because we are blessed with so much. And to see people that have nothing, it's hard. It's really hard. So we feel so blessed to be able to be here to just have an opportunity to pick up these turkeys for those in need," she said.

The Raleigh Rescue Mission will cook the turkeys it picked up Friday. Some will be used to feed the homeless families that will call the mission's shelter their home this Christmas. Others will become part of the mission's "Gobble to Go" program.

"We prepare the meals and take them to people that cannot leave their homes for health reasons, maybe due to they're elderly. And those will go out Christmas Eve," said one of the mission's directors Brace Boone.

The project is funded by the sale of five dollar raffle tickets that can net the grand prize winner a brand new Lexus. Many local businesses contribute to the fundraiser which HPW workers hope will grow beyond the more than 7,500 tickets sold this year.

Despite the cold, volunteers and HPW workers had nothing but smiles on their faces as they loaded the turkeys into sedans, minivans, and box trucks Friday.

"It's a great feeling to do it every year," HPW employee Matt Horton told ABC11.