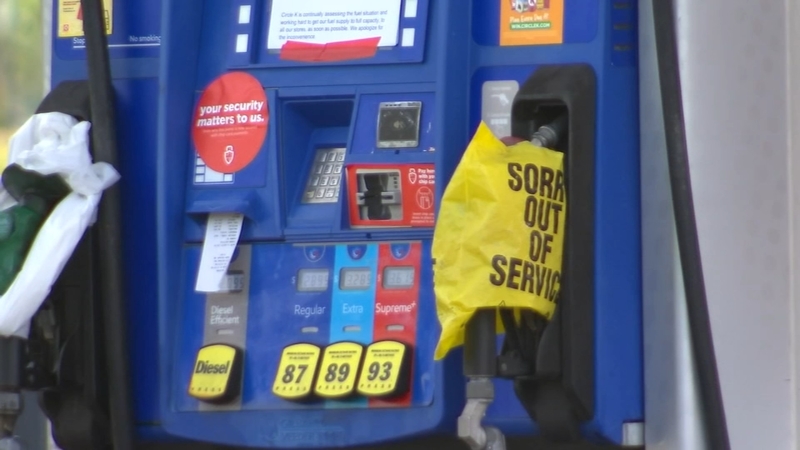 The Colonial Pipeline runs from Texas to New Jersey, passing right through North Carolina. Markets in the Southeast are highly dependent on the pipeline for petroleum product supply, according to ABC News. Colonial delivers more than 70 percent of the transportation fuels supply to Georgia, South Carolina, North Carolina, Tennessee, and Virginia.

The pipeline closed as part of a proactive measure when pipeline officials learned they were targeted in a cyberattack by a group called DarkSide, which operates out of Russia.

OUT OF GAS. Annie Lomison, manager of Eagles Express in #Knightdale, covers up the pumps as they run out of gas after a busy morning. #abc11 pic.twitter.com/EVxzfJpt94

In Raleigh, long lines could be seen at some gas stations, including at a Costco.

Here's why there could be gas shortages this summer

Market speculation has already sent gasoline futures up to highs not seen in more than three years. But that speculation will likely level off once the pipeline reopens.

AAA admits gas prices are surging but said that has actually been happening for the past week -- and is normal for this time of year.

"We're heading into the summer travel season so we do have more people, more motorists going on the road as demand now is increasing and as the world is opening up. We're seeing where people take road trips," AAA spokesperson Tiffany Wright said. "So you add to that, that the pipeline is now down and you add to demand going up and I think that's kind of the perfect storm, if you will, for prices to inch upwards."

"The hackers who breached Colonial Pipeline's systems have made it harder for hardworking North Carolinians to go about their lives, but I will not allow businesses to take advantage of this incident to charge excessive prices," he said. "North Carolina's price gouging law is in effect - please let my office know if businesses or people might be trying to profit off this situation so we can hold them accountable."

Customers can report potential price gouging by calling 1-877-5-NO-SCAM or by filing a complaint here.

Gov. Cooper declared a state of emergency Monday and issued an executive order temporarily stopping some fuel regulations to help ensure there is enough fuel supply available throughout the state.

As of 9:30 p.m. Tuesday, Gas Buddy said around 50 percent of metro Raleigh area gas stations are without gasoline.

U.S. officials sought to ease concerns about rising prices, stressing that widespread disruptions have not yet occurred. The White House said late Monday that it was monitoring supply in parts of the Southeast and that President Joe Biden had directed federal agencies to bring their resources to bear.

There is action at the state level as well. Georgia Gov. Brian Kemp suspended state taxes on motor fuels through Saturday. Georgia collects a gasoline tax of 28.7 cents per gallon and a diesel tax of 32.2 cents per gallon.

"It will probably help level the price at the pump off for a little while," Kemp told reporters at DeKalb-Peachtree Airport in Chamblee, an Atlanta suburb.

Colonial Pipeline, based in Alpharetta, Georgia, said it hired an outside cybersecurity firm to investigate the nature and scope of the attack and has also contacted law enforcement and federal agencies.

"Colonial Pipeline is taking steps to understand and resolve this issue. At this time, our primary focus is the safe and efficient restoration of our service and our efforts to return to normal operation. This process is already underway, and we are working diligently to address this matter and to minimize disruption to our customers and those who rely on Colonial Pipeline," the company said.

President Joe Biden has been briefed on the situation, according to a White House spokesperson.

"The federal government is working actively to assess the implications of this incident, avoid disruption to supply, and help the company restore pipeline operations as quickly as possible," the spokesperson said.

The official said the administration is proactively reaching out across the sector to ensure that they have protections in place that can detect similar attacks.

The FBI said it is working with Colonial Pipeline on the ransomware attack.