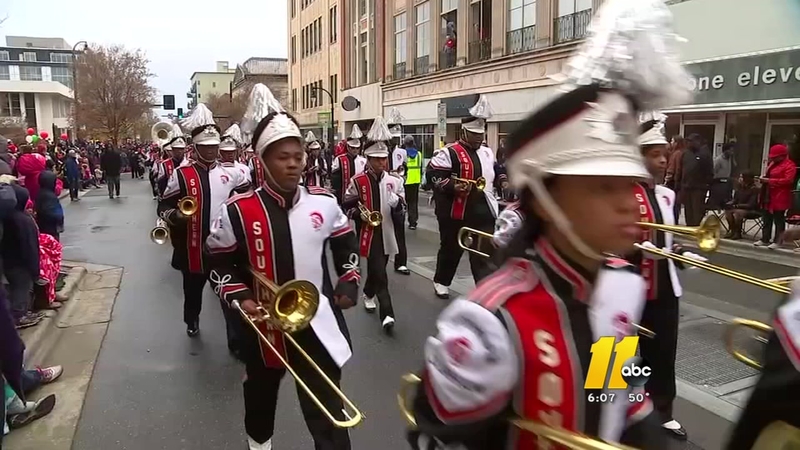 Occasional drizzle from overcast skies fell on the holiday parade fans who lined both sides of Durham's Main Street on Saturday, But the threat of showers had no effect on the enthusiasm we saw along the route.

Durham Mayor Bill BelI told us, "I hate to see the weather the way it is, but it's a good thing for Durham. I'm glad that we were able to kick it off again last year."

That's when, after a seven-year gap, Durham resumed its traditional Christmas parade through the city. The route's different now, a straight line along one of the city's most successful streets where news businesses and buildings under construction are visible.

The parade fans represent all ages, cultures, and races, too. William Tilson, a young father of a two year old, smiled when asked what brought him out for Saturday's parade.

"Came out to support everybody and see Santa," said Tilson. "And see all the awesome folks!"

Durham officers were very visible and ready if needed. Police chief Cerelyn Davis said, "We're just trying to be really smart about how we manage large groups and crowds. We don't want to take safety for granted."

Delores Shirley, who came to the parade with her 6-year-old niece, seemed nearly as happy as the little girl when she spoke with ABC11.

"It always takes me back to my childhood and the excitement, of being out and screaming for people who are in the parade," she said.

Participants included youth sports teams, marching bands, people who voluntarily patrol the city's greenways and elected officials like state senator Mike Woodard who turned to our camera with this message for Bull Citizens:

"We're out here to have a good time for the kids," said Durham County Sheriff Mike Andrews. "I hope everyone has happy holidays and a merry Christmas!"

Watch for my #FacebookLive from our #abc11 float in the #DurhamHolidayParade and #FunFest! Catch us on my #FB page, Anthony Wilson WTVD after 11 a.m.! pic.twitter.com/QiTecpjyRk

Durham Police Chief @1cjdcop and the @ABC11_WTVD crew are ready for the Durham Christmas Parade! Rain or shine the floats will roll. #ABC11 pic.twitter.com/2ArpLZVAU0

And we’re off! It’s The Durham Christmas Parade y’all! Come out to Main Street in downtown Durham for the fun! #ABC11 pic.twitter.com/Y7fVYeSz2G