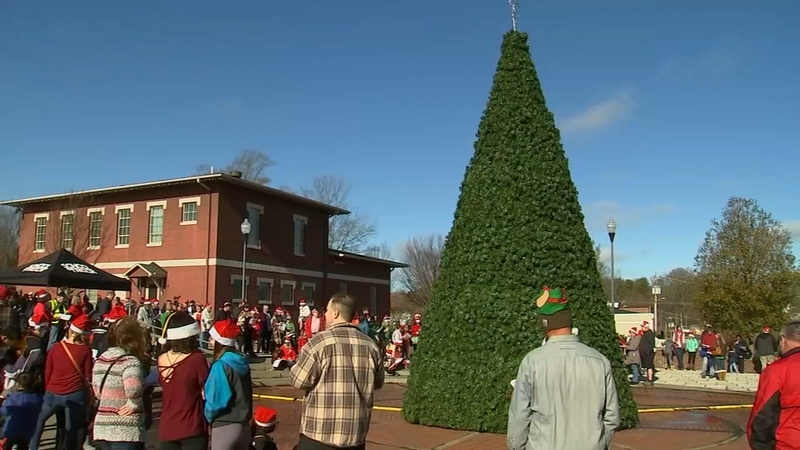 WAKE FOREST, N.C. (WTVD) -- Hundreds of people gathered around the Christmas Tree in front of the Wake Forest Town Hall for a community event Saturday afternoon, organized in direct response to the cancellation of the town's parade.

"It's really awesome to see the community come together. The weather held out. The skies opened up just in time for us to sing and belt out. It was just fun," said Wesley Spottiswood, who helped organize the event.

Town officials announced the Christmas parade's cancellation in a statement last Wednesday night, following threats of violence "posed by outside groups." The decision came about a week after the Town of Garner canceled their parade for similar reasons.

Spottiswood, who works in Wake Forest, noted the potential economic impact the lost crowds could have on businesses in coming up with his idea. That's why he encouraged others to visit the shops and restaurants both before and after meeting at the Christmas Tree to sing carols.

"Obviously today has been very great with the foot traffic, the community coming out to support all the businesses downtown. This truly shows what the town of Wake Forest is all about," said Joe Kimray, the co-owner of B & W Hardware, Company, located on South White Street.

Large crowds were also spotted at The Cotton Company and Shorty's, with people lined up around tables to place their orders.

Sitting on a bench outside, Jay Boriotti, a fellow small-business owner, was holding several sweatshirts with the words "Wake Forest Strong" printed on the front.

"As a business owner, I know I can pick up the phone at any time. All the other business owners would do whatever they can to help out. It's just a great community, so today's a great turnout," Boriotti said.
While the crowds may not have hit the thousands that typically attend the annual Wake Forest Christmas Parade, business owners were grateful for the grassroots effort.

"All these businesses downtown in Wake Forest are family-owned businesses. Their money goes back into the community. So it's very important for us to have these days like this so we can continue to support our community," said Buddy Willis, the co-owner of B & W Hardware Company.

"Just having the community come together. They were all different ages. The kids got to walk down the street. They were all waving. They all got Santa hats," added Spottiswood.

Spottiswood applied for and received a permit for the event, and Wake Forest Police provided security and blocked off part of Brooks Street. It was reopened shortly after attendees finished singing.