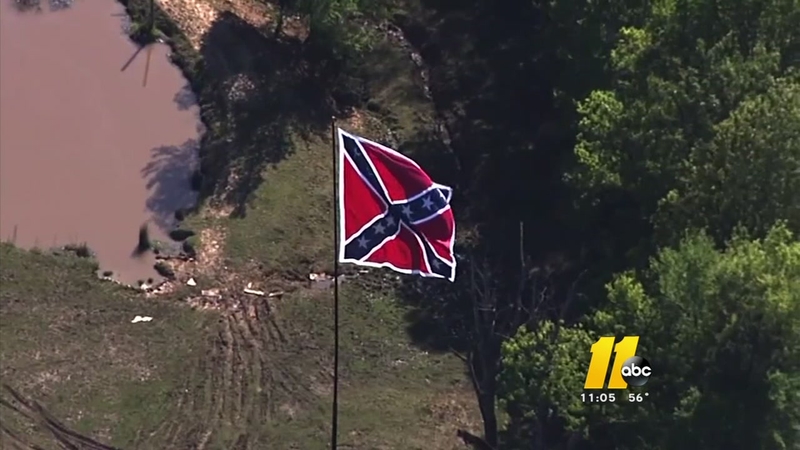 HILLSBOROUGH, NC (WTVD) -- When you drive down Highway 70 toward downtown Hillsborough, a historic Confederate battle flag waves at you.

This controversial flag sits on the edge of private property that belongs to Dorothy Holloway's relatives.

"I don't understand how you can pick something like that and be so upset over it," Holloway said. "Live with it."

For now, that's exactly what people will have to do after the flag appeared during the weekend.

Holloway said it's a symbol of freedom of speech and Southern heritage. Not racism.

This is Dorothy. Listen to her view on the battle flag and #confederate monument controversy brewing in #OrangeCounty. @OCNCGOV plans to change how such flags and symbols are displayed. #ABC11 pic.twitter.com/doJQmfzyV6

"The blacks are just as equal as I am," Holloway said. "I have no problem with it."

Heather Redding with Hillsborough Progressives Taking Action is part of a group hoping to get the flag taken down.

"If you truly believe in racial equity, it's not about your feelings," Redding said. "It's about this community and their feelings. This is not a symbol that represents the town of Hillsborough. This does not represent our values."

A big Confederate battle flag went up along US 70 near Hillsborough during the weekend.

Alamance Taking Back Alamance County also known as ACTBAC is responsible for the display.

Redding said she believes the flag was put up in retaliation for Orange County Schools ban last year on all Confederate symbols, and the mounting pressure for the removal of UNC's Silent Sam Confederate statue.

"I take solace in the fact that this flag probably has a shelf life," Redding said.

Some county leaders fear a financial and economic impact if the flag remains as is. Right now the county's planning director is proposing changing its laws on how all flags can be displayed on private and commercial property, including the U.S. flag.

Here’s some of what we heard on both sides of the Confederate Flag fight over Orange County’s proposed rules to limit the size of flags on residential property. #abc11 pic.twitter.com/sAxt0Jvf8k

The changes would require flags in residential areas to be no wider than 24 square feet, no taller than 24 feet, and sit 50 feet from the land owner's property line.

Ryan Barnett wore a black T-shirt to the meeting bearing the Confederate flag. It read "Heritage Not Hate" on the back. Barnett dismissed critics of Confederate heritage as race-baiters.

"The problem today is not Confederate symbols, but rather a cultural schizophrenia - see what you want to see, hear what you to hear," Barnett said.

Latarndra Strong, who helped lead the successful effort for a ban on Confederate flags in the Orange County school dress code, told the group she defends a property owner's right to display any flag they like - within reason.

Strong argued the sheer size of the battle flag on Highway 70 is aimed at intimidation and should come down.

"There are kids in this neighborhood who pass by that flag and wonder what has happened to their community," Strong said.

Orange County commissioners are set to vote on the flag size ordinance on May 15. If approved, residents would have a year to comply with the new rules.

'SOCIAL TENSION' OR FREEDOM OF SPEECH?

"I do think it's a symbol aimed at the African American community. I'm definitely concerned," McKee said. "This particular group if they have issues with what's going on in Alamance County, they need to focus on Alamance County. I don't feel they need to bring their issues into Orange County."

District 2 Commissioner Renee Price, who is black, said her feelings are mixed on the issue.