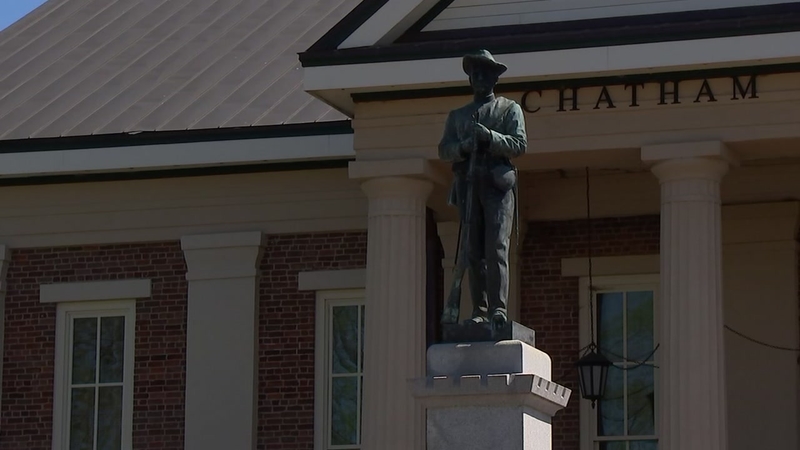 PITTSBORO, N.C. (WTVD) -- A statue in downtown Pittsboro honoring "Confederate heroes" is at the center of a public debate regarding the monument's future. The statue stands in front of the old county courthouse, which now serves as a museum.

Supporters for the statue argue the symbol represents Southern heritage. Those who wish to see the statue come down and moved elsewhere feels otherwise.

On Monday, supporters with the Sons of the Confederate Veterans congregated in front of the statue; much to the delight of drivers passing by and honking to show their support.

Packed house at the Chatham County Agriculture and Conference Center for public debate over a confederate statue in Pittsboro. Supporters want the Our Confederate Heroes statue to stay. Others want to see it go. #ABC11 pic.twitter.com/8UiTv36GUa

One woman visiting from Georgia was visibly upset about a pending decision on removing the statue.

"I'm not for any of this going on. I hate it," said Samantha Bostwick. Speaking of her disapproval, she added, "I despise it. It doesn't need to be happening."

She compared the removal of a Confederate statue to the existence of one celebrating civil rights leader and activist Dr. Martin Luther King Jr.

"How would y'all feel if we tore down Martin Luther King statue?" she asked. "Pull out your Bible! Where does it say go around and rip down everybody's statue of their heritage? Nowhere. It doesn't. And it doesn't teach hate."

The Chatham County Board of Commissioners' agenda called for public comment on the matter.

"It's just always what we've known," said local resident Hannah Jones. "That's what we've been taught since we were little. So it's part of our lives."