Peter Manfredonia, suspected in 2 murders, may be driving stolen SUV 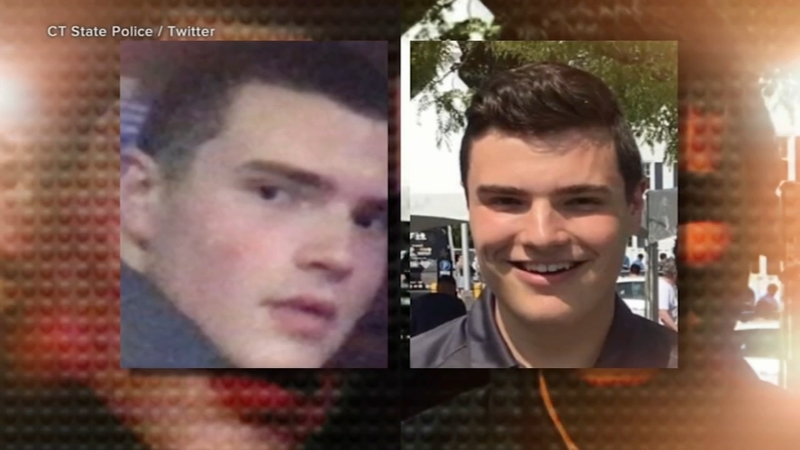 DERBY, Connecticut -- Police and the FBI are continuing a multi-state manhunt for a college senior from Connecticut who is accused of killing two people, and authorities are now urging the public to be on the lookout for a black Hyundai Santa Fe the suspect may have stolen.

It is not confirmed that Manfredonia stole the vehicle, but police say it was taken from the area where the suspect was last seen.

"Anyone with information should call 911 immediately and DO NOT APPROACH!" Pennsylvania State Trooper Anthony Petroski tweeted.

Stolen Vehicle, Black Hyundai Santa Fe bearing Pennsylvania registration KYW-1650.
NOT CONFIRMED that Peter Manfredonia stole the vehicle, but it was taken from the area where he was last seen.
Anyone with information should call 911 immediately and DO NOT APPROACH! pic.twitter.com/EBqFtRF7XX

Manfredonia, 23, fled Connecticut after he allegedly killed killed 62-year-old Ted DeMers and 23-year-old Nicholas Eisele before forcing Eisele's girlfriend into her car and fleeing the state with her.

The woman, 23, was located Sunday at a rest stop near Paterson, New Jersey, with her 2016 Volkswagen Jetta, police said, and was not hurt.

Now, how his family is asking him to turn himself in.

A lawyer for Manfredonia's family, Mike Dolan, said the suspect has struggled with mental health issues and has "sought the help of a number of therapists."

"Peter, if you are listening, you are loved," Dolan said at a news conference Monday. "It is time to let the healing process begin. It's time to surrender. You have your parents' and your sisters' and your family's entire support. So, Peter, from your parents, we love you, please turn yourself in."

Manfredonia, a finance and mechanical engineering major from Sandy Hook, is suspected of killing DeMers and assaulting another man, possibly with a sword or machete, in Willington on Friday after they found Manfredonia walking along a road and offered him a ride back to his motorcycle.

The second victim, Nicholas Eisele, was found dead at his home Sunday in Derby, which is about 60 miles southwest of Willington and just west of New Haven.

Eisele, a 2016 Newtown High School graduate, worked with his father in a landscaping and irrigation business. State police described him as an acquaintance of Manfredonia's.

Earlier on Sunday, a Willington man reported being held against his will by Manfredonia, who then left with food, several guns and the man's truck, which was later found abandoned near Osbornedale State Park, about a mile from Eisele's home.

Eisele's family set up an online fundraiser to help cover funeral expenses and far exceeded the goal of $10,000 in just a few hours. On the page, friends and family shared memories, including his love of his mother's German shepherds, Trooper and Sandy.

Police say Manfredonia was seen wearing dark-colored shorts and a white T-shirt and was carrying a large duffel bag.

Please call 911 for anything immediate on the whereabouts of the suspect. Do NOT approach, he is considered ARMED AND DANGEROUS.