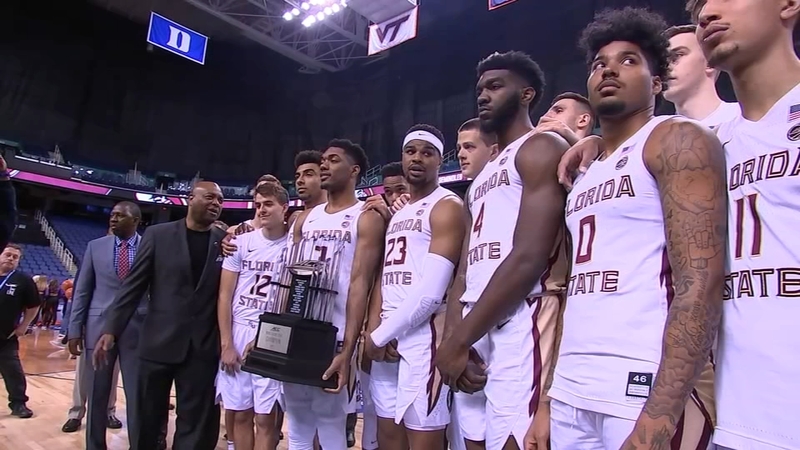 GREENSBORO, N.C. -- The latest updates on how the novel coronavirus is affecting college sports in North Carolina:

March Madness has taken on a different meaning as sports have virtually shut down.

The NCAA canceled its men's and women's basketball tournaments on Thursday because of the spread of coronavirus, putting an abrupt end to the season less than a month before champions were to be crowned.

"The decision is based on the evolving COVID-19 public health threat, our ability to ensure the events do not contribute to spread of the pandemic, and the impracticality of hosting such events at any time during this academic year given ongoing decisions by other entities," the NCAA said.

The decision was not unexpected after virtually all conference tournaments were canceled and many schools said they would not participate in further athletic events.

The announcement comes a day after the NCAA announced the games that were scheduled to start next week would go on, but played in mostly empty arenas. That plan was scrapped as every major American sports league from the NBA to MLB put the brakes on its season due to concerns about the pandemic.

For most people, the new coronavirus causes only mild or moderate symptoms, such as fever and cough. For some, especially older adults and people with existing health problems, it can cause more severe illness, including pneumonia. The vast majority of people recover from the virus.

The NCAA men's basketball tournament has been played every year since 1939 when Oregon won the championship in Evanston, Illinois. It has grown through the years, both in size and stature. The three-week tournament generates almost a billion dollars in revenue each year for the NCAA and its hundreds of member universities and colleges.

It is now one of the biggest events in American sports, a basketball marathon of buzzer-beaters, upset and thrills involving 68 teams. The field for the men's tournament was scheduled to be announced Sunday. The 64-team women's field was to be revealed Monday. N.C. State, the ACC champion, was expected to be among the top seeds,

Games would have started on the men's side on Tuesday in Dayton, Ohio, then spreading out to eight sites from coast-to-coast from next Thursday through Sunday.

4:45 p.m.
N.C. State said it will suspend all athletic activities until further notice in response to COVID-19 (coronavirus).

"This is effective immediately with the safety of student-athletes, coaches and staff in mind," the university said.

5 p.m.
The Mid-Eastern Athletic Conference (MEAC) has announced the suspension of the remainder of its Men's and Women's Basketball Tournament, which is being held at the Norfolk Scope Arena. Additionally, all spring sports competitions are being suspended through the end of the Spring 2020 semester and next week's Women's Bowling Championship will also be suspended.

Fans who have purchased tickets to the MEAC Basketball Tournament for games which have not been played should contact the venue through which they made their purchase for refunds.

3:45 p.m.
The University of North Carolina-Chapel Hill announced that it will immediately suspend all athletic-related activities.

In a statement released Thursday afternoon, Price said the suspension includes all sports, competitions and practices.

"We are taking this action to protect the safety of our student-athletes, coaches, staff and others who are essential to these activities," said Price in a written statement. "I know it is a great disappointment to our student-athletes and coaches, whose hard work and dedication to their sports and Duke is inspirational to so many, but we must first look out for their health and well-being. This is clearly an unprecedented moment for our university, our region and the wider world. As we take steps to confront the spread of this virus, I'm grateful for the cooperation and support of the entire Duke community."

Duke Vice President and Director of Athletics Kevin White also commented on the Atlantic Coast Conference's decision to cancel the remainder of the men's basketball tournament.

"During this unpredictable time, Duke Athletics fully supports all measures to protect the health and welfare of the Duke family and beyond," White said in a written statement. "While we understand this may be daunting to many, please know that this decision is entirely in the best interest of all student-athletes, coaches, staff and fans."

Many sports are taking precautions to keep fans from gathering in large groups.

ACC Tournament canceled
The rest of the ACC Men's Basketball Tournament has been called off.

The final three days of the tournament were officially canceled around 12:15 p.m. on Thursday. Florida State, the tournament's No. 1 seed and regular-season champion, will represent the league as ACC champion.

ACC Commissioner John Swofford addressed media and fans from the court after the announcement.

"After a recent discussion of about 15 minutes ago with our presidents and athletic directors again, the league has made a decision to end the ACC Tournament as of today," Swofford said. "It's tough to say those words in front of these men that would be able to play. It's tough to say that in front of these fans...but we believe it's the right decision at this particular point in time."

FSU's players were given the ACC championship trophy in a strange celebration with those in attendance huddled close together.

Swofford held a news conference Thursday morning to explain his decision, at that time, to continue the tournament.

"We're in a very fluid situation. Obviously uncharted territory for us and for you as well I assume. It changes daily, it did change weekly at one point in time. It changes daily now, and may well be changing hourly. Right now we are ready to tip the afternoon session," Swofford said.

"We want to provide an opportunity to compete in this tournament for our players. Our understanding and belief is that that is what they would want," Swofford said.

N.C. State and Duke had been scheduled to play the first game of the day.

"Over the past two to three weeks, we as a league have been in almost constant conversations with the health authorities locally and with the state of North Carolina, with the CDC, and with the NCAA. Those conversations and the advice that we have been given has changed along the way--as you well know. We try to make the best decisions that we make, based on the best information that we can get," Swofford said.

Wednesday night was an unprecedented moment in sports.

With rising fear surrounding COVID-19, the NCAA announced that the men's basketball tournament would be played without fans in the stands. Likewise, the ACC decided to do that for the remaining games in its tournament.

But then everything changed.

An NBA player for the Utah Jazz tested positive for COVID-19. The NBA prompted suspended games and announced that the season too was suspended.

On the heels of that, other leagues are reconsidering their decisions.

ESPN analyst and former Duke Basketball star Jay Bilas said he saw no way the NCAA could continue to allow amateur players to compete when doing so was too dangerous for the professional players in the same sport.

This is such a difficult issue. The pros have suspended play. The pros. How does the NCAA trot out amateurs to play for money? No way. This is a public health issue, not just a sporting event. Is the NCAA comfortable playing when paid pros will not? Really? pic.twitter.com/UOuwZmnrGH

"As much as we would like this opportunity for our student-athletes, coaches, and their communities, we know that ultimately any decision we make must err on the side of caution," said Commissioner Que Tucker in a written statement.