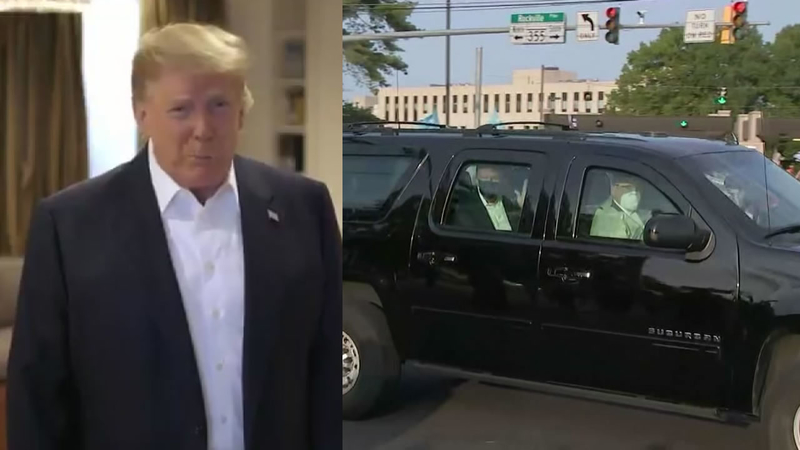 "Undoubtedly, I would worry that the Secret Service members would have to be quarantined and tested," said Dr. Peter Chin-Hong, Professor of Medicine and Infectious Disease Specialist at UCSF.

The same concern was raised by a medical doctor at Walter Reed National Military Medical Center where the President has been hospitalized since Friday.

"Every single person in the vehicle during that completely unnecessary presidential 'drive-by' just now has to be quarantined for 14 days. They might get sick. They may die. For political theater. Commanded by Trump to put their lives at risk for theater. This is insanity," tweeted, Dr. James P. Phillips, an attending physician at Walter Reed.

Every single person in the vehicle during that completely unnecessary Presidential “drive-by” just now has to be quarantined for 14 days. They might get sick. They may die. For political theater. Commanded by Trump to put their lives at risk for theater. This is insanity.

Pres. Trump's SUV is bulletproof and sealed against any chemical attacks. This airtight design makes it easier for COVID-19 droplets to linger says Dr. Chin-Hong.

"We call them aerosol and in an enclosed space, even for a few minutes, they can linger particularly if there is no air exchange," Dr. Chin-Hong said. "The president's car is made to be very sealed so it's even riskier than another car."
Hours earlier, President Trump's medical team cleared confusion about his oxygen level dropping twice in recent days.

President Donald Trump's doctor said the president has completed his second Remdesivir treatment but is "not yet out of the woods." UCSF Doctor Robert Wachter agrees and says the next 7 to 10 days are vital to see if he responds to the latest treatment.

Dr. Wachter says steroids are used with severe COVID-19 cases.
"One of the unique superpowers of COVID is that the way many, if not most people, die is your own immune system is powerfully trying to attack the virus but attacking your own body at the same time. That's the mechanism through which giving steroids sometimes helps," said Dr. Wachter.

President Trump's doctors announced he may be released from the hospital on Monday.

Dr. Wachter doesn't believe that's the best medical decision for the president, "He should stay for at least another several days. Because if he is rock stable by mid-week then it might be okay for him to leave. At this point, he might think he's out of the woods but he is not."
Report a correction or typo
Related topics:
politicsdonald trumpcoronavirusucsfpresident donald trumpcovid 19
Copyright © 2022 KGO-TV. All Rights Reserved.
CORONAVIRUS
How sex could play a role in developing long COVID: Study
COVID-19 vaccines for kids still being shipped out in NC
COVID vaccine rollout begins for young children, babies
Gov. Roy Cooper tests positive for COVID-19
TOP STORIES
Durham museum hosts its first family LGBTQ+ activity
Man shot, killed in Fayetteville, police searching for suspect
PGA Tour Pro Varner III donates to Durham-based SwingPals
There are many ways to eat healthy amid high food prices, experts say
Cop who sought GOP bid allegedly punches state senate candidate: video
Solar patio umbrellas sold at Costco recalled after multiple fires
Where abortion rights stand in NC after Roe v Wade decision
Show More
Biden: G-7 to ban Russian gold in response to Ukraine war
Anglers of all ages can fish for free in NC on July 4
Girl dies after being shot, Durham police investigating
Out Raleigh celebrants react to possible SCOTUS actions
22 people were found dead in a South African tavern: police
More TOP STORIES News