Coronavirus in US: Majority of Americans say stay-at-home orders are worth it, polls show 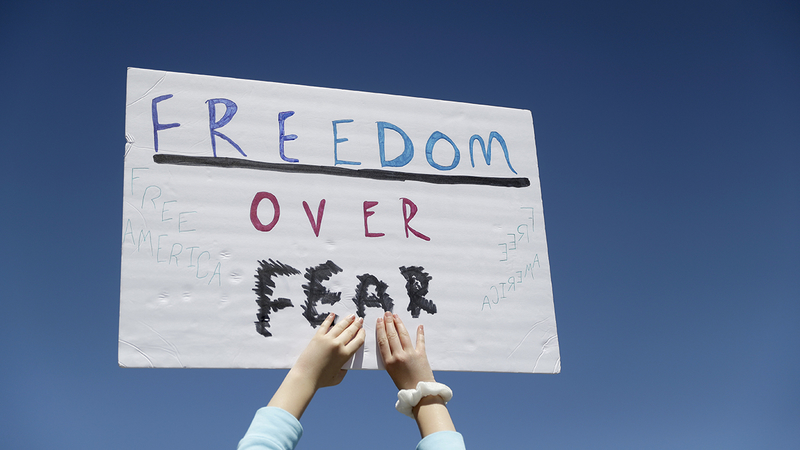 Battle over reopening amid coronavirus pandemic in US

A majority of Americans agree with stay-at-home orders during the coronavirus pandemic, even as small pockets of attention-grabbing protests demanding the lifting of such restrictions emerge nationwide.

Around 80% of Americans agree that the strict measures protect people from the virus and help limit its spread, according to the latest Kaiser Family Foundation Health Tracking Poll.

And according to a separate survey from The Associated Press-NORC Center for Public Affairs Research, only 12% of Americans say the measures where they live go too far. About twice as many people, 26%, believe the limits don't go far enough. The majority of Americans (61%) feel the steps taken by government officials to prevent infections of COVID-19 in their area are about right.

The AP-NORC survey also finds that a majority of Americans say it won't be safe to lift social distancing guidelines anytime soon, running counter to the choice of a handful of governors who have announced plans to ease within days the public health efforts that have upended daily life and roiled the global economy.

The polls show a partisan divide

Republicans are more likely than Democrats to say that restrictions go too far. While only 19% of Americans believe these measures put unnecessary burdens on people and the economy and causing more harm than good, 38% of Republicans feel this way, according to the KFF poll.

More Democrats than Republicans, meanwhile, think restrictions don't go far enough, 33% to 19%, according to the AP.

GOP party members are also more likely to think the battle against the coronavirus is nearing its end. While more than half of those surveyed agree that the worse is yet to come in this pandemic, among Republicans, just 27% feel that way, compared to 64% of Democrats, according to KFF.

Most Americans give themselves an 'A' in following social distancing guidelines

Most Americans, at 84%, say they've only left their homes for essential trips. and about the same percentage (80%) say they could do this for another month, including 34% who say they can do it for 6-plus months.

The AP-NORC poll of 1,057 adults was conducted April 16 to 20 using a sample drawn from NORC's probability-based AmeriSpeak Panel, which is designed to be representative of the U.S. population. The poll KFF was conducted nationally between April 15 to 20 among 1,202 adults.