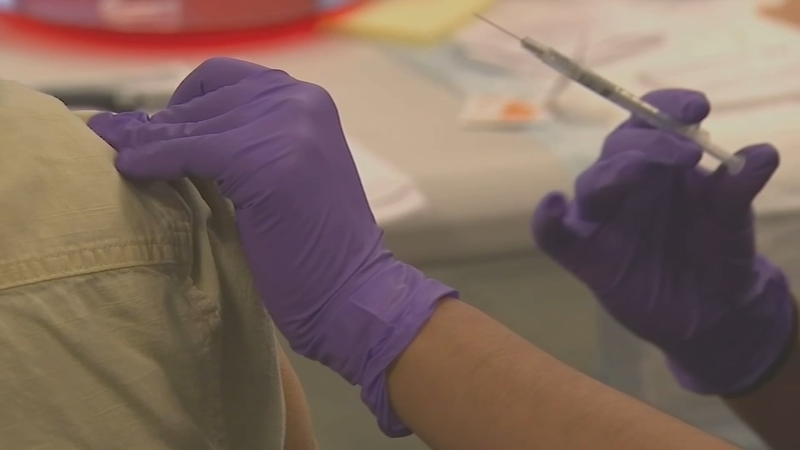 As North Carolina expands COVID-19 vaccine eligibility to Priority Groups 1, 2, and 3, sign-ups are picking up statewide.

While supply has ramped up, aided in part by the recently-authorized Johnson & Johnson vaccine, demand is still overwhelming.

"We have about 7,000 names on our waitlist right now," said Todd McGee, the Community Relations Director in Orange County.

Here's how the Johnson & Johnson vaccine is different from the others

"We have actually worked with UNC Health on a couple of occasions. They have taken names off of our waiting list because they've been getting a lot more vaccine," said McGee.

Wake County's Public Health Department is taking a similar approach. They have about 200 people on their waitlist in Priority Group 1, less than that in Group 2, and about 15,000 in Group 3. They are set to receive 10,000+ doses Tuesday from the state and will be inviting a large amount of those people on the waiting list to receive their vaccine. At this point, the department is only accepting people in Priority Groups 1, 2, and 3 to sign up.

The state is currently aiming for March 24 to open vaccines for Group 4, though the Lee County Public Health Department is administering vaccines to people in that group prior to then.

On Monday, the Health Department announced they are " suspending COVID-19 vaccine registrations until further notice due to limited vaccine supply," though they noted they have enough supply to complete all currently scheduled vaccine clinics.

Early on in the vaccination process, they sent more than 1,000 people to WakeMed.

Now there are more options, ranging from Walgreens to local pharmacies.

Dr. Jennifer Burch is the owner of Central Pharmacy and Central Compounding Center in Durham. She said the waitlist at Central Pharmacy is upwards of 550 people, a large number considering they typically administered 65-68 shots a day.

"We are working our way through the priority groups at the moment. So if you're in Group 1, 2, or 3, we're working through that list first. If we have an end of the day which is urgent that we need to get rid of, we're calling anybody that we can get in here quickly that looks like they live within 5 or 10 minutes of the store," said Dr. Burch.

"We are all anticipating that the availability of the vaccine will increase and the pharmacies will be able to work through their waitlists more rapidly," said Tony Gurley, the Pharmacy Manager at Glenwood South Pharmacy in Raleigh.

Over in Benson, Dr. Ritesh Patel is the Pharmacy Director at the Eastern Carolina Medical Center Pharmacy. He said the clinic received 600 Johnson & Johnson doses last week, on top of allotments from the state and Johnston County. It holds weekly appointment-only clinics, where they allow eligible people so sign up day-of to stand-by.

"Because of the fact that we've gotten vaccines almost every week the last few weeks, we feel very comfortable with saying we should have vaccines on Wednesdays," said Dr. Patel.

Still pharmacies aren't always given much notice of when, and which vaccines, they'll be receiving.

"We don't really know when doses are going to show up until they show up. So that is a little bit hard to plan how we're going to administer doses until they arrive," said Dr. Burch.

It's why while pharmacists work hard to accommodate people's requests for a specific vaccine version, they encourage people to get vaccinated as soon as they can.

"So we're back to the advice of the best one to get is the first one that is available to you. But I do understand there are people who prefer one over the other. But you run a risk of it being delayed a little bit if you insist on one particular brand," said Gurley.

That means being proactive in searching for available doses.

"I recommend that people sign up for as many waitlists as they possibly can. And once we have the vaccine available, we will start contacting people, and if you've already had the vaccine (from a different provider), that's great," said Gurley, who said the waitlist at Glenwood South Pharmacy is about 200 people.

While each provider is handling the process differently, many offer online sign-up forms allowing people to be added to a waiting list. Pharmacists encourage people to not sign-up for the same list multiple times.

Vaccine frustrations are causing people to find appointments across county lines for their shot.

"I've had about 300 doses so far of Moderna. And we've used it all except for 30 doses. And we have those appointments scheduled for the rest of the week," said Thomas Bunch of 5th Avenue Pharmacy.

On a good day, Bunch says 20 to 30 people can get the Moderna vaccine. While numbers are small compared to the county health departments, the impact is big.

There's a lot of frustration going around in terms of securing an appointment, with some placing themselves on several waitlists or traveling to a different county for a shot.

"A lot of our patients are loyal to us. There is something to be said for independent community pharmacies and giving that family feel," said Cara Beth Brann of Josef's Pharmacy.

When the first shipment does arrive, each dose has a name assigned for it. Josef's Pharmacy has a waitlist too.