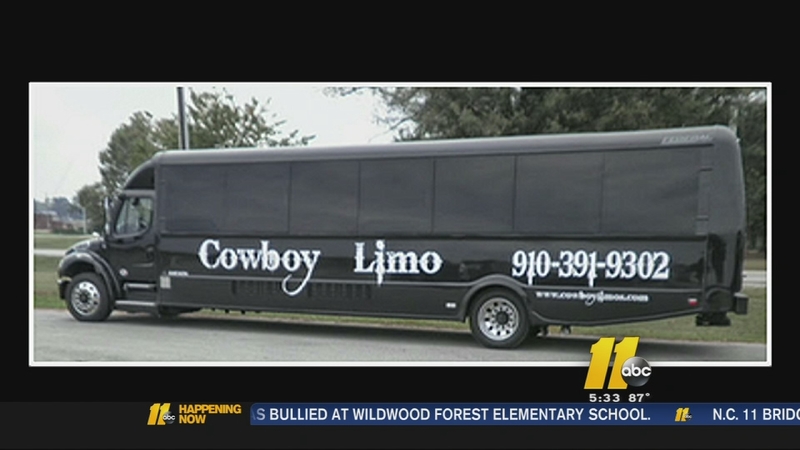 Customers say they aren't "getting what they paid for," and the government says the company can't operate until it cleans up its act.

With graduations, proms and weddings going on -- limos and party buses are big business. One company is still in business despite complaints, and federal fines.

Cowboy Limo, is a popular limousine business based out of Dunn. Their website says they have the biggest fleet in the state with more than 30 limos, party buses, and SUVs.

"It was prom and I wanted my son to be riding a nice limo for prom," said Sandra Owens.

Owens says she paid Cowboy Limo $385 bucks, but what showed up on prom night?

"It was an SUV navigator, SUV vehicle," said Owens.

It was not exactly the "night to remember" they were hoping for. So she sent Cowboy Limo home, and started speed-dialing.

"We tried to call another company, but you know, everybody was booked -- short notice," said Owens.

So, she drove the kids herself.

When she tried to get her money back, Owens he was told Cowboy Limo has a no-refund policy, and their paperwork showed she reserved an SUV -- not a limo.

"I'm like, 'That's not what I ordered. I have a SUV truck. I know people with trucks,'" she said.

What Owens says she didn't know, was that the feds had ordered Cowboy Limo not to operate months earlier. The Federal Motor Carrier Safety Administration is a branch of the U.S. Department of Transportation, which regulates large trucks and buses.

They've been investigating Cowboy Limo since last year, and charged the company with three violations including failing to implement an alcohol/drug testing program, not having proper insurance, and doing business across state lines without operating authority. The feds fined Cowboy Limo more than $40,000.

Then, this February, on a compliance follow-up, the feds found Cowboy Limo continued to do business despite not being properly licensed and fined it another $45,000 for a total of more than $85,000. The feds also ordered the company not to operate until they became compliant with federal law.

All that happened before Owens hired Cowboy Limo for the prom, and before Holloway Funeral Home paid cowboy limo $685 to provide a limo for a client's funeral service.

"They were late getting there," said Rayvon Gray with Holloway Funeral Home.

The limo finally showed up almost an hour late for the somber service.

"It was real frustrating especially when you're trying to bury your loved one, and everybody is trying to go because you're on a schedule," said Gray.

Armed with two complaints and the federal sanctions, we went to get answers from Cowboy Limo owner Mark Wilkins.

Diane: "Don't you have to listen to the federal regulation as far as not operating? I got a quote today from you guys from Cowboy Limo."

Wilkins: "No, Cowboy Limo is my affiliate company."

Wilkins: "I can refer that business to anyone I want to as long as I'm not running Cowboy Limo vehicles. That's not an issue."

Mark: "It's an affiliate company. It's the vehicles. I can refer the business to anyone I want to, Shug. This is America."

Diane: "So Limo King is in your wife's name."

Even though Limo King is in his wife's name, it still doesn't have federal authority to operate over state lines.

Wilkins: "That's not what I've been told. Our audit is scheduled for next week."

Wilkins claims a DOT rep told him that Limo King was OK to operate despite the sanctions against Cowboy Limo.

Diane: "Shouldn't people be concerned because you had problems with Cowboy limo that's not going to cross over to Limo King?"

Wilkins: "No, ma'am. No ma'am. I don't have any problems with Cowboy Limo. I've been waiting for the DOT to get me upgraded over a random drug test pool."

Wilkins claims he's now acting as a referral service for other limo companies -- not just the newly-established Limo King.

Diane: "So if the customer has a problem, who deals with it?"

Wilkins: "We both do. Because I referred the business and that customer is also, whoever is picking them up."

Diane: "But the customer has no clue. They think they're hiring Limo King or Cowboy Limo."

Wilkins: "We let them know, once it gets down to booking, it will be us or one of our affiliates that pick you up."

However, when an I-Team producer put that claim to the test and emailed Cowboy Limo for a quote for a party bus to pick us up in Myrtle Beach and bring us to North Carolina, we didn't hear back from Limo King or any third-party
company. Cowboy Limo gave us the quote even though that company is ordered not to do business.

Still, Wilkins thinks it's all legit.

Diane: "So, you don't feel you're circumventing the law at all?"

Diane: "By just opening up a different company in your wife's name? Why not put it in your name?"

Wilkins: "I can put it in my name, but it's the best business decision."

Diane: "Are you admitting to any fault?"

Wilkins: "Here is the thing. We make mistakes. Out here in this world, we make mistakes. I'm not a criminal. I work very hard to have what I have. I've corrected my mistakes. Now, let's move on."

Wilkins blames the DOT for his problems. He says he gave them proof of Cowboy Limo's insurance and drug testing more than a month ago. However, they still haven't cleared the company to operate.

Until they do, Wilkins says Cowboy Limo will continue to act as a referral service, and take a cut from each referral they make. He says they're also making payments on that $86,000 in fines.

The funeral home did get $100 back for the funeral limo that showed up late.

Wilkins, however, won't refund Owens' $385 for the SUV showing up instead of a limo. He says he'll give her a credit for another service. She says, "No thanks."