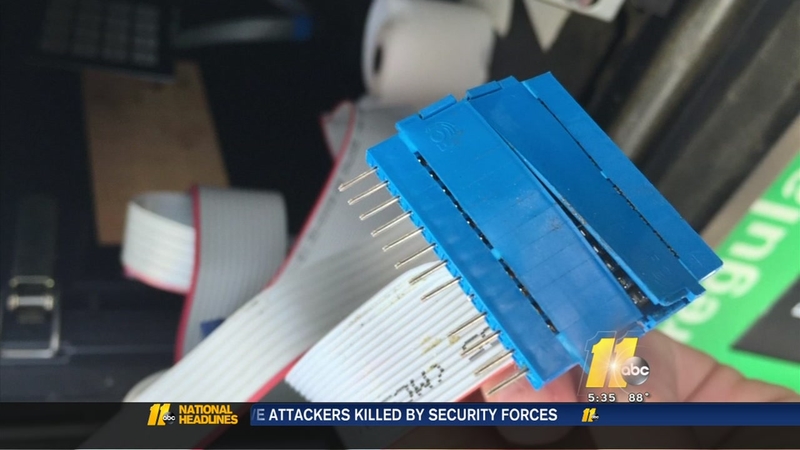 SPRING LAKE (WTVD) -- Spring Lake police are investigating after a credit card skimmer was found at a gas station on Main Street.

It happened on Wednesday when a woman noticed a suspicious charge on her credit card account.

From there, she called Spring Lake police who traced the activity back to the Kangaroo gas station on Main Street.

When the investigating officer arrived on the scene, he found that the red security tape over the pump's computer door had been broken.

When he looked inside, he found a skimming device that was pulling credit card information using a Bluetooth network.

The hacked pump was the one farthest from the clerk's view.

Police said it takes hacker's less than 60 seconds to install which is less time than most people spend at the pump.

Many drivers told ABC11 that they were unaware that hackers had become so advanced.

"That does make me concerned," said Peter Stwart. "Like I said before when I put that (credit card) in originally, I check for skimmers because I saw years ago how you can tell (they're there), but then I read they're doing it on the inside. So, now I have to go to my phone."

You can check for a skimmer's Bluetooth network using your mobile phone.

Open your phone's settings menu, search for Bluetooth networks, and check to make sure no suspicious network comes up.

Wednesday's skimmer is the second one found near Fort Bragg.

Police believe the two may be connected and that the suspect is targeting the military community; however, no suspects have been arrested.