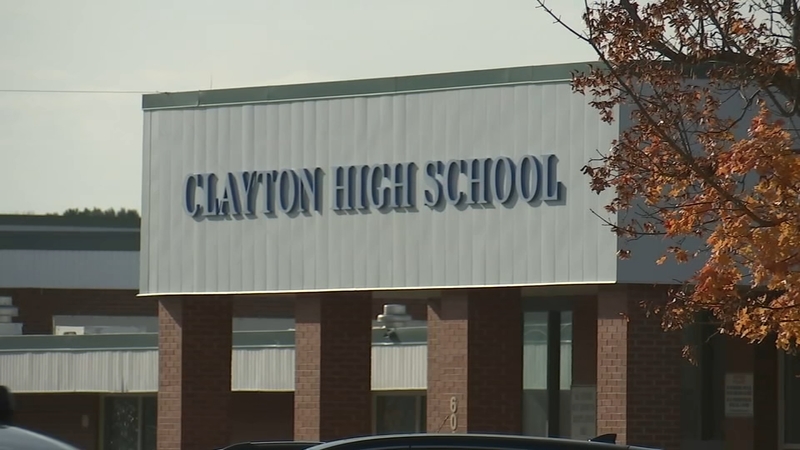 Clayton High offers cash to students for tips about cyberbullies

CLAYTON, N.C. (WTVD) -- Clayton High School leadership shared a new strategy to combat cyberbullying and online harassment with students and their families this week, offering rewards of up to $250 for information in identifying individuals behind posts.

In a two-page message, school leadership wrote in part, "Recently we were made aware of the formation of several social media accounts that are soliciting unauthorized pictures and disparaging statements regarding other students. This information has escalated to where postings have crossed the threshold into cyberbullying and harassment. This is governed by NC General Statute 14-458.1 which outlines that those in violation could be charged with a Class 1 or Class 2 misdemeanor. It is also in violation of JCPS policies 4304 and 4226 which carries punishments of a 10-day suspension and possible recommendation for long-term suspension."

"First by authority provided to principals by JCPS policy, students will be suspended indefinitely from any and all extracurricular activities at the school including athletic teams, performing arts, clubs, and student leadership positions. The length of this suspension from participating will be at my discretion. Furthermore, students following a harassment page will not be eligible for school scholarships, awards, or other honors. Finally, any student found liking or following a page engaged in hurting others will not receive recommendations from administration and staff for colleges, jobs, or other post-secondary opportunities. Quite simply, enough is enough. If you are liking or following these types of pages, you are complicit in that type of behavior and again, that will not be tolerated. "

"My original reaction was a lot of shock because the punishments listed were very extreme, especially given the circumstances. From the accounts that I've seen, they weren't so bad, so all these (punishments) were incredibly extreme," said one student, who asked to remain anonymous.

The student said she believed the policy was well-intentioned, though too far-reaching, and she added that she thought there had been previous and more severe incidents of bullying in the past which did not draw this level of response.

"For the past couple days, things have been so tense because we're so afraid that someone is going to report us for literally anything. They're offering a cash reward, so there's a lot of incentive to just report anything," said the student.

Punishments are more extreme for individuals found to be contributing to or posting the content.

"For those who are found to be contributing to these pages, they will receive additional school consequences and referral to law enforcement officials for prosecution. Those who create such sites will also be recommended for the maximum punishment allowed by policy and general statute," the message noted.

Rewards are offered through a Clayton High School Crimestoppers webpage, where individuals can submit tips on bullying and harassment, selling/using controlled substances, theft, threats, vandalism, and other things. Information can also be reported to administrators or staff. Rewards are given confidentially and are available only to CHS students.

Holly Naude, a parent of a Clayton High student, is hopeful the monetary incentive will help reduce inappropriate content from being shared, and she added that she doesn't believe students are aware of the consequences of such posts and activity online.

"At this point, their minds aren't really thinking about life outside of high school. But I do think that it's pretty important because they need to realize that. That it can have pretty dire consequences especially when you consider everything - every couple of days, you've got a school shooting," said Naude.

The message states that local law enforcement officials are working with administration leaders to address these pages, as well as "Internet providers and these host sites to track down those responsible through cyber links and IP tracing."

In a statement to ABC11, the Johnston County School District wrote:

The message from (principal) Dr. (Bennett) Jones was in response to the creation of several spam social-media accounts that appeared to harass or bully Clayton High students. The Clayton High PTSA offered to fund the reward. The social-media accounts in question were deleted shortly after the message was sent to the school community. We can't comment on student discipline, but the school district's legal counsel would evaluate any proposed consequences for students. Online bullying and harassment of students is a serious and growing problem. The school district as a whole will continue to evaluate how to address online harassment or bullying in the future.

Jessica Fowler, the Bullying Prevention Manager with Poe Center, is not familiar with this policy but spoke generally of the dangers of cyberbullying.

"Research has shown that a lot of cyberbullying is carrying over in-person. And it can have just as many effects on a youth's mental wellness as in-person bullying, and can also cause signs of trauma and things like that. So, it can be just as harmful as if the child is experiencing it only in-person," said Fowler.

"It's really important to provide children that education about their digital footprint for example, and potential long-term consequences, so they are then empowered to be smart on social media," said Fowler.