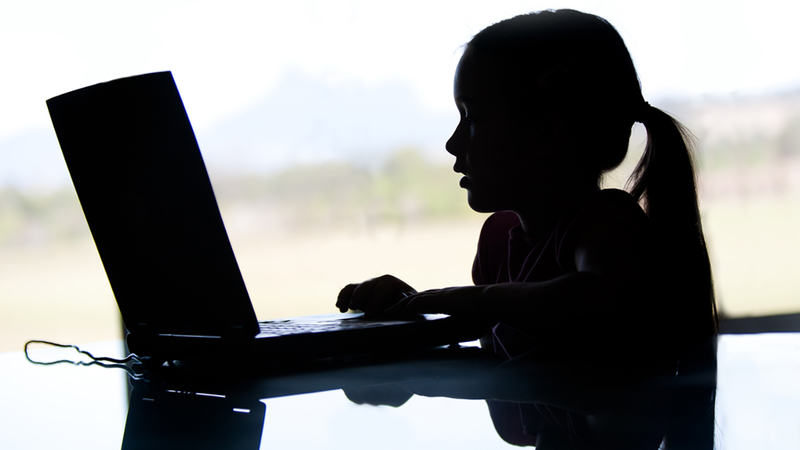 Predators lurking beyond your screen

In today's digital world, teens have access to more than 2 million applications. Pictures, videos, and texting have all become the main way they communicate. Generally, teens are made aware of the dangers of a digital world - but most never think their activity could put them in grave danger.

If you would like to learn more about digital dangers, there is a workshop for parents on Monday, May 1 called "The Right Click."
Click here for event information. We will stream the event live on ABC11.com

"It has seemingly become more common for kids to share pornographic content themselves or sexually explicit messages, pictures," he explained.

Those pictures can easily land in the wrong hands.

"The phrase we use is 'sextortion' and it's shockingly common," ManMonagle said. "Young teenagers have been either tricked or coerced or forced into sending compromising pictures of themselves. Next thing they know, the person is responding saying 'You need to send me more pictures, you need to send me fully nude images and if you don't, the pictures that I already have of you are going out to all your friends, your parents.'"

With no verification required to create an account online, teens and predators alike can pretend to be anyone. This can lead to what's known as catfishing - when a person is lured into a relationship by someone pretending to be someone else.

AJ Toman talks to Diane Wilson about her experiences

Fifteen-year-old AJ Toman says catfishing happens all the time and has even happened to her.

"It was a girl that looked to be in my grade, looked to have stuff in common with me," AJ explained.

What started off as normal direct messages turned creepy.

After this realization, AJ stopped all communication. However, the boy still tried to play with her emotions; he even threatened to hurt himself.

Detective MacMonagle says catfishing takes a scary turn when it's a criminal behind the screen coercing a child or teen to send compromising pictures.

"There are child predators online, and if you think you're the only victim, in that case you're probably one of dozens - if not more," MacMonagle said. "That this person is seeking out online and amassing a collection of pornographic images of people who are stuck in this situation. More often than not, when children are victimized by that, they are so scared by whatever content they sent to that person being sent out that they just keep on and hope that it will go away rather than reporting it to a school resource or their parents or a law enforcement officer. I can't encourage strongly enough that they will not go away and your best course of action is to reach out to someone for help."

Luckily for AJ, she trusted her instincts. For others, catfishing is just the beginning of something far more sinister.


"We've pretty consistently stayed in that list, primarily because of the access that North Carolina allows by having both the coast and the mountains, are a big tourist pool," Abbi Tenaglia with Transforming Hope Ministries explained. "And so with that brings demand for cheap sex and cheap labor."

Transforming Hope Ministries is a nonprofit that works to end human trafficking in the Triangle. Tenaglia founded the organization after she had a first-hand experience on just how dangerous an online connection can be.

She wanted to get out of her hometown, so she began searching for a room for rent in Florida. She thought she had found the perfect fit with a couple.

"I emailed back and forth with them. I talked to the wife over the phone, so I thought, 'I've done my due diligence, I've investigated them,'" Tenaglia said. "They seem real, we've built a little bit of a relationship and so I agreed to move, it was about 700 miles away. I was going to go live with them."

At just 17 years old, Tenaglia found herself in a disturbing situation. The husband asked personal questions that seemed innocent at the time, but Tenaglia's answers were soon used against her.

"He found out through these questions that I'm away from home, far away from home. I've been in what I feel like was a very conservative environment and I'm ready to break out of that. And he found out things about me that he then used against me to ultimately have me standing in front of a web camera, nude."

Fortunately, Tenaglia confided in a friend who helped her get out of that terrifying situation, but being sexually exploited at such a young age changed her life forever.

"What was taken from me was so significant, and how I reacted to it was so strong," Tenaglia shared. "I spent 10 years trying to run away from that, trying to separate myself from the shame and guilt and just the ugliness of what happened in that house. I dealt with homelessness, had my daughter in the middle of that 10 years, was addicted to cocaine for almost that entire time. I went through multiple abusive relationships and got to a point where I was then selling myself to feed my cocaine addiction."

She reached her lowest point, and eventually found the path to getting help. She's turned her life around but says not everyone caught up in human trafficking is so lucky.

"Knowing what we know now, there are millions of kids that don't get out of it. That's kind of how it starts for them and it all gets real ugly real fast for them."

Tenaglia says something as innocent as a selfie could have frightening consequences.

"There could be identifying marks in that picture that perpetrators can use to find you easily," she explained.

She said one of the biggest ways to combat these dangers is to start digital awareness at an early age.

"As parents, understanding that when you hand over that cell phone, you're handing over some of your time as well, because you need to stay on top of what your kids are looking at, who they're talking to, how much information they're putting out there."

WATCH: What parents can do when it comes to digital safety/dangers

Everyone wants to trust their child, but Detective MacMonagle says the worst thing parents can do is "assuming that your child is not the one who is doing that or not the one who has access to it."

Monitoring your child's digital activities is crucial to keeping them safe.

"As much as you trust your child and regulate what they do and monitor their activities, expect that they have unfettered access to the internet," MacMonagle said. "Expect that they can - and will - find anything that they want to find. So when you have these tough conversations, when you ask them serious questions, don't shy away from things that seem uncomfortable to talk about. Make sure they understand the dangers that are out there."

A big step to digital safety is making sure the geotracking or location services is turned off on the apps that track or share your location while using it.

"All of a sudden, they know where this person lives they know what neighborhood this child lives in. If that person had made the decision to try to come down here and wait at a bus stop, they had the opportunity to do it. They had all of the information they needed to physically put their hands on the child," MacMonagle warned.

WHAT IS YOUR TEEN/CHILD HIDING?

There are several apps that allow teens to hide activity they don't want parents to see.

The HiCalculator App appears to be a calculator, but it's actually a place where you can hide photos and videos.

Instagram is wildly popular among teens. AJ explains parents should check if their child has two accounts. One you see and then one that's known as Finsta. AJ says the Finsta is like a fake Instagram account that, theoretically, only your close friends would know about.

Attorney General Josh Stein reminds parents to talk to their teen about the reality that videos, pictures, and online chats can always be shared and they never go away.

"They're transitory, they are images that come and go, but the fact of the matter is nothing is transitory. Whatever digital footprint you leave, you leave for life," Stein said.

In today's digital world, these dangers are becoming a daily reality. It is important to remember - no matter how much you trust your child or teen, it's better to be involved in their digital activity than to ignore it.