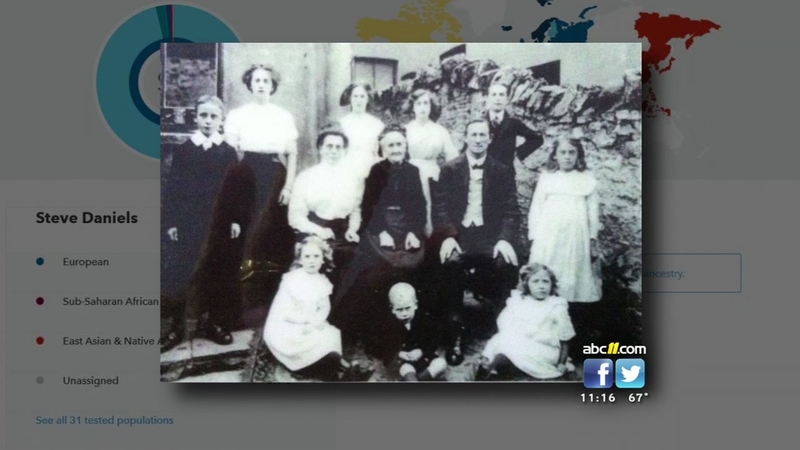 get the facts before testing your DNA

RALEIGH, North Carolina (WTVD) -- DNA testing can be a fun way to unlock the mysteries of your family history, but you should also think about potential pitfalls.

Tisha Powell and I decided to embark on the journey by purchasing a 23andMe test kit at the drug store, collecting a saliva sample and sending it for analysis. The total cost was about $200 per test.

My DNA report had a surprise I was not expecting. Most of me, 99.3%, is what I always knew, my family is European -- British and Irish -- and Scandinavian. But number two on the list traces my roots to Sub-Saharan Africa. The 23andMe report reveals, as recently as the 1820s, I have relatives from West Africa. It amounts to .4% of my DNA. I told Tisha: "This is blowing up our family story, we've got to rewrite our family history now."

The DNA testing process also raises bigger questions. The 23andMe website warns that your DNA could be turned over to criminal investigators.

Steve and Tisha work on their tests

The case of Michael Usry, Jr. is viewed as a key example. He became a prime suspect in the cold case murder of 18-year-old Angie Dodge. The Idaho Falls Police Department received a warrant for information in the ancestry.com database, in an effort to solve the crime. His father's DNA was a close match to the crime scene and police showed up at Usry's door in New Orleans, with a warrant for his DNA. A month later, Usry was finally cleared. "I would like to think that is a rare exception and that was certainly a miscarriage of justice," says Duke University professor Misha Angrist.

Ancestry.com provided ABC11 with the following statement about the case:

Ancestry understands the responsibility that comes with the trust our customers place in us and privacy is among our highest priorities. Ancestry will not share any information with law enforcement unless compelled to by valid legal process, such as a court order or search warrant. The Usry case was unique. It involved a database we purchased that was an open and publicly available research resource at the time we bought it. After this case, we made the database private to help protect the privacy of our customers. This is also the only formal legal request for DNA related information we have received, as indicated in our transparency reports.

23andMe says it has received law enforcement requests for the DNA of five people and has "successfully refused turning over any customer data".

The DNA report also reveals potential health risks, hidden in your body. Professor Angrist, who explores the intersection of biology and society, with a focus on human participation in research and medicine says that points to other concerns. Federal law protects us from employment and health insurance discrimination, but if your DNA gets in the wrong hands, he says, it could be used against you by life, disability and long-term care insurance companies.

DNA testing can also expose hidden family secrets. Professor Angrist has a friend, who just learned he has a half-brother, he didn't know existed.

"In some cases learning that kind of information may be a joyous occasion where you discover a sibling you never knew you had," says Angrist. "In other cases it may be entirely unwelcome, it may be a reminder that there was a relationship in the past that was a source of secrecy or shame."