Would McCrory be a good fit in the Trump Administration? 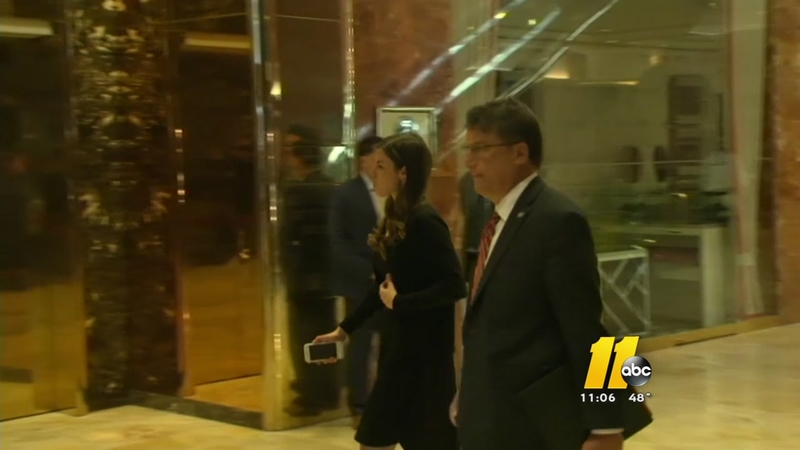 McCrory arrived at Trump Tower in New York City just after 10 a.m. He took the elevator without speaking to reporters, so his arrival is all anyone on the outside knows as far as details.

It's no secret that Trump has been appointing people to top jobs, so this meeting with McCrory has people wondering what could be next for the 74th governor of North Carolina.

"I think the Trump people have been interested in Mr. McCrory for a while," said Dallas Woodhouse, Executive Director of the North Carolina Republican Party.

Woodhouse said he isn't privy to any inside information, so he too could only speculate, but said there are a number of items on McCrory's resume that could have piqued Trump's interest.

He also pointed to McCrory's experience in disaster relief, infrastructure, transportation as well as his goals for energy exploration.

"That would be a great fit, that he started getting the energy sector in North Carolina going, but a lot of the hiccups were a crushing federal government but could now go to the other side and help us get energy exploration off the coast going, helping our domestic hydraulic fracturing going in North Carolina," said Woodhouse.

McCrory was also at Trump's victory rally in Fayetteville on Tuesday night.

He has shown support for Trump during the election and developed somewhat of a relationship that could possibly translate well for the future.

"Governor McCrory was with Trump the whole way and I was back stage with them at times, they had a good rapport. I think that while they're not the same exact kind of people, I think they had a lot of connection when they were together," Woodhouse said. "But of course it's up to the President-elect to decide what he's going to do, and whether Mr. McCrory wants to do that or if he wants to go back to Charlotte and be in the private sector for a while."

For now only time will tell. Meantime, Woodhouse was quick to point out that the governor still has work to do before he leaves office.