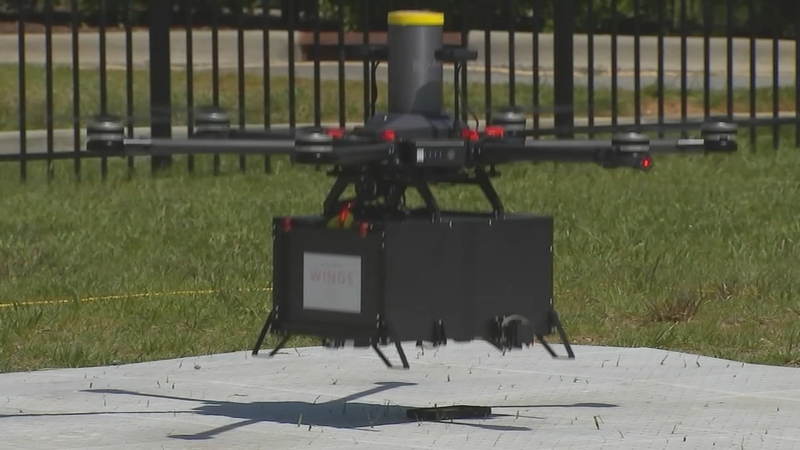 HOLLY SPRINGS, N.C. (WTVD) -- North Carolina is one of the few states in the county where you can see drones dropping retail items for customers. The towns of Holly Springs, Fayetteville, and Raeford are taking part in a pilot program using drone delivery. The town's in the midst of a partnership with company Flytrex as part of a broad-ranging, three-year Federal Aviation Administration program to safely test innovative uses of drones.

'They only get ten waivers across the country as far as companies," said Mike Ciampa, Flytrex Regional Operations Manager for North Carolina. "And, the only ones doing any kind of deliveries are us and Amazon, and Google. But, as far as delivering fast food and kind of what we're doing, we're the only ones in the country doing it."

Holly Springs is one of the fastest-growing locations for Flytrex in the state. Drone delivery is being offered as an option for the Holly Springs Towne Center off Highway 55.

"Back in October is when we opened up here in Holly Springs," Ciampa said. "We were doing a few deliveries a day maybe at that point. At this point, we're doing several hundred per week. And that's a lot. We service the entire shopping center here for the Target shopping center of 55."

Deliveries are restricted to a one-mile radius around the shopping center. Flytrex is able to drop deliveries into backyards and at two public drop sites, Ting Park and Carolina Brewing Co.

The drones are autonomous and GPS-guided and customers do not come into contact with the aircraft.

"It never lands," Ciampa explained. "The drone just hovers about 80 feet off the ground and drops the food down with the package."