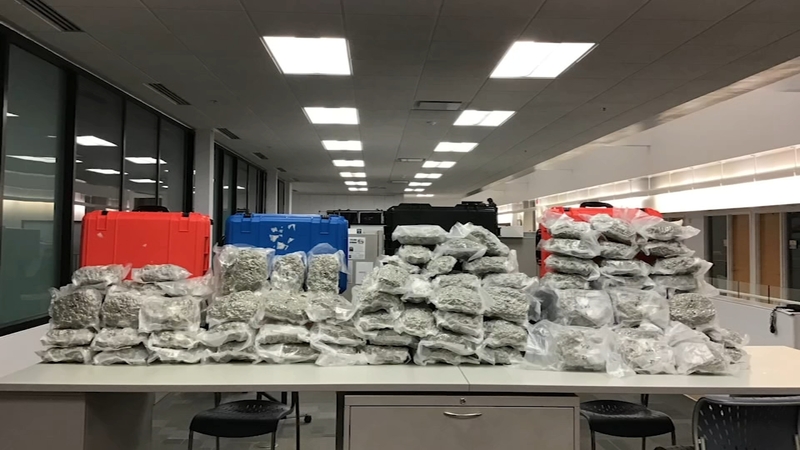 CLAYTON, N.C. (WTVD) -- A Goldsboro man is behind bars after authorities said they found him with 90 pounds of marijuana at a Clayton home, the largest drug bust in the history of the Clayton Police Department.

Clayton officers arrested 38-year-old Thomas Arthur Austin Jr. on Sept. 4 at a house on the 700 block of Champion Street in the Cobblestone neighborhood.

Officers said they found Austin with 89.13 pounds of marijuana -- in nearly 100 bags which were vacuum-sealed -- and a 'large amount of cash.'

“Make no mistake about it, this guy was a major drug dealer.” @ClaytonPolice @CBlairMyhand pulling out a stash from the evidence room. The bust is one of the largest in Clayton’s history and has a street value of $400,000. 38ye-old man is behind bars. #ABC11 pic.twitter.com/J9fW5Wl2CZ

Authorities said the marijuana came from California and was shipped via UPS.

A detective tipped off Clayton police, who were able to make the arrest.

Austin is being charged with trafficking marijuana and maintaining a dwelling for that trafficking, according to a post by the Clayton Police Department. Because there was a playground nearby, Austin was also charged with possessing a controlled substance within 1,000 feet of a park.

Austin's initial bond was set at $500,000. About a month earlier, Austin had been arrested by the Johnston County Sheriff's Office for possession of more than 10 pounds of marijuana and was out on bond on those charges.