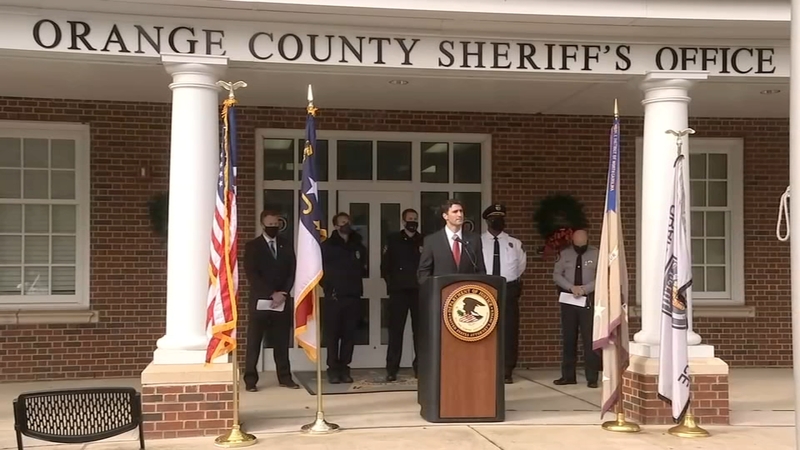 CHAPEL HILL, N.C. (WTVD) -- Twenty-one people -- including current and former students from University of North Carolina, Duke University, and Appalachian State University -- have been arrested for dealing drugs at and on college campuses.

21 people -- including current and former students from University of North Carolina, Duke University, and Appalachian State University -- have been arrested for dealing drugs at and on college campuses.

He said the suspects were responsible for moving thousands of pounds of marijuana, hundreds of kilograms of cocaine, LSD, molly, mushrooms, steroids, HGH, Xanax and other narcotics.

The investigation started years ago. The Orange County Sheriff's Office and the Drug Enforcement Agency launched an investigation in November 2018 into cocaine being sold in the Chapel Hill area.

It soon became clear that the illegal drug distribution was happening at or near UNC fraternity organizations.

"Dealers set up inside these houses, poisoning fellow members of their fraternity, fueling a culture. And that's why I say today is about saving lives. Because this reckless culture has endangered lives," Martin said.

An Appalachian State fraternity member is also accused of being part of the drug ring, selling to fellow App State students as well as people in Chapel Hill.

Investigators also identified a female Duke student as being responsible for distributing cocaine to students at Duke and to fraternity members at UNC.

A primary supplier from California was the first person charged. According to court documents, from March 2017 until March 22, 2019, he supplied approximately 200 pounds of marijuana and two kilograms of cocaine weekly to a cooperating defendant in Orange County. Law enforcement operations at locations associated with the subject in Carrboro and Hillsborough resulted in the seizure of 148.75 pounds of marijuana, 442 grams of cocaine, 189 Xanax pills, steroids, human growth hormone, other narcotics, and approximately $27,775 in U.S. currency.

The investigation showed that payment for drugs was made using Venmo and by sending cash through the U.S. mail. That supplier pleaded guilty to on Nov. 24 and was sentenced to 73 months in prison.

"College communities should be a safe haven for young adults to get a higher education. Not a place where illegal drugs are easily accessible," DEA agent Matt O'Brien said. "The arrest of these drug traffickers makes these college campuses and their respective communities safer."

UNC-Chapel Hill Chancellor Kevin Guskiewicz issued the following statement about the allegations; "We are extremely disappointed to learn of these alleged actions on our campus. The University is committed to working with law enforcement to fully understand the involvement of any university individuals or organizations so that disciplinary action can be taken. Although none of the individuals named today are currently enrolled students, we will remain vigilant and continue to work with our law enforcement partners to identify and address any illegal drug use on our campus. Our community can be certain that the University will enforce the student conduct code to the fullest extent possible."

A representative of Phi Gamma Delta issued the following statement: "It is shocking to learn of the allegations involving our chapter and others at the University of North Carolina. These allegations are very serious, suggest conduct which violate our policies and values, and we have zero tolerance for the alleged actions. We are committed to working with law enforcement and the University to fully understand the involvement of our members."
Report a correction or typo
Related topics:
chapel hilldurhamboonencfraternitycollege studentsdrug arrestdrug bustuncdrugduke
Copyright © 2021 WTVD-TV. All Rights Reserved.
TOP STORIES
3 dead, 2 missing as tubers go over dam near NC-VA border
Merging where the lane ends not 'jumping the line'; may become the law
Tropical Storm Claudette expected to form today
2 dead, 2 injured in Durham shooting; activists say city needs to step up
LATEST: Gov. Cooper urges more people to get vaccinated
Father gives daughter life-saving gift as living organ donor
UNC student body president slams his own university
Show More
Charlotte lawmaker suggests fine for donating to homeless
Grandfather with Alzheimer's gives Navy-bound grandson's 1st salute
Restaurants begin dishing out 20 percent Living Wage Fee to customers
100-mile yard sale happening in central NC this weekend
US Mint to issue quarters honoring notable American women
More TOP STORIES News