Roper brothers will coach against each other for first time when Duke, N.C. State meet Saturday 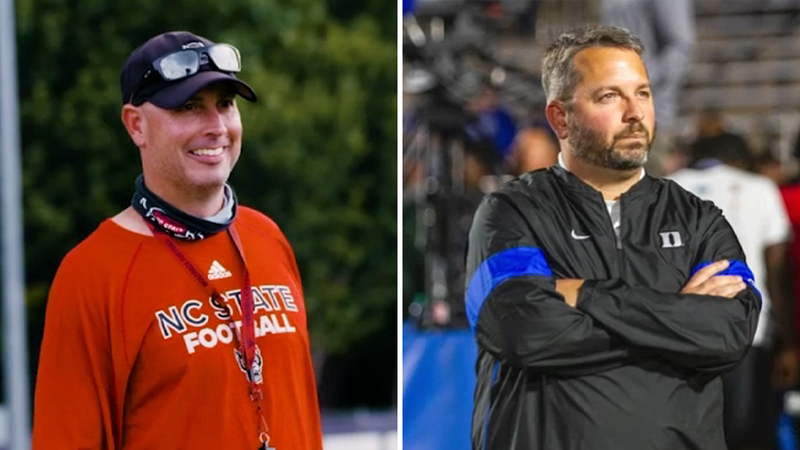 Brothers will coach against each other when Duke, N.C. State meet

RALEIGH, N.C. (WTVD) -- On Saturday, Duke and NC State go head to head for the first time in seven years and for only the fourth time since the ACC expanded - it will also be the first time the Roper brothers will coach against each other.

"This will be something he and I can talk about forever," Zac Roper said. "Our families will be able to talk about it forever. Our Dad, as a former college football coach, getting to see both of his sons against each other, which is different."

"We were talking a little bit earlier in the week," Kurt Roper said. "I called him on my way home one night and I said, 'hey, I don't know if I like this.' He was the same way and the reason is it's just more than us. We've got, both of us have two kids at home and they're getting to the ages where they're emotionally invested. It's a little different."

Kurt Roper, the running backs coach at NC State, and Zac Roper, the offensive coordinator and quarterbacks coach at Duke, are used to being on the same sideline. The brothers coached together at Ole Miss for six years and at Duke for another six.

"We normally talk a lot more," Kurt Roper said. "This week is obviously different. We are competitors this week, so the conversations are, it's really non-existent. I'm looking forward to going against Coach Cut the first time. We've never done it and I have so much respect for (Duke head coach David Cutcliffe) and I'm so grateful for what he's done for my career. It's going to be fun to see him. It's really just having the families involved that make it the challenge."

Those families know that for the Ropers, football is a way of life.

"A lot of our conversations and our wives and our kids, more so our wives, get annoyed at how much football we talk when we get together," Zac Roper said. "It may be a backyard barbeque or just come over and watch a movie, inevitably the conversation turns to football and obviously a lot of times, quarterback play.

The brothers' love for football comes from their dad, Bobby Roper, who coached college football for two decades and was a coordinator for Pitt's 1976 national championship team. Bobby Roper will be watching from home Saturday night, rooting for both offenses but mostly enjoying the bond the Ropers have created.

"When you're a part of a team that's trying to accomplish a goal, those things build bonds that I don't think ever break and then when it's your family on top of that it's really unique," Kurt Roper said. "I still think back to 2013, when we ended up winning the Coastal Division at Duke; those are memories that never go away and to be able to do it, like my brother literally sat right next to me in the press box and we did it together. Those are things that, it's rare. It creates a bond, there's no doubt about it."

The brothers have only grown closer as time has gone by.

"Obviously he's my, not only my brother, he's my best friend in coaching, a confidant, somebody you can go to and talk about anything," Zac Roper said. "We're closer now than we were as kids; there's a six-year age difference. I was pretty young when he went off to college. We're definitely closer now and have that bond that you're talking about. We had six years at Duke to coach together, six years at Ole Miss to coach together and obviously these last two years back in this area. Being able to get back closer together, there's definitely a strong, strong bond that's probably even over and above just a brotherly because of what we do professionally."