The drama carried to the final possession as Wake Forest had only a desperate chance. Domari Monsanto took the inbounds pass and heaved a one-handed throw to the far end that appeared to be a bit late with the ball hitting the glass then bouncing off the rim before falling away.

That ended a Tobacco Road classic in famously rowdy Cameron Indoor Stadium, which started when Krzyzewski - who is retiring after this season - wasn't with the team as it returned to the court from the locker room after halftime. The team's official Twitter account later posted that Krzyzewski wouldn't return, and no other details were immediately available.

Coach K not on the bench in the second half Duke taking on Wake Forest. Jon Scheyer coaching the team. @ABC11_WTVD pic.twitter.com/YZfq9lmykb

Associate head coach Jon Scheyer, who has been designated as the 75-year-old Krzyzewski's successor for next season, took over as the teams began second-half play. Scheyer had also coached the team in Duke's win at Wake Forest last month with Krzyzewski out due to an illness.

Duke's Paolo Banchero drove the paint on the ensuing possession but missed the drive, only to see the 7-foot-1 Williams crash the glass and dunk the ball through the net to roars from the Cameron crowd. 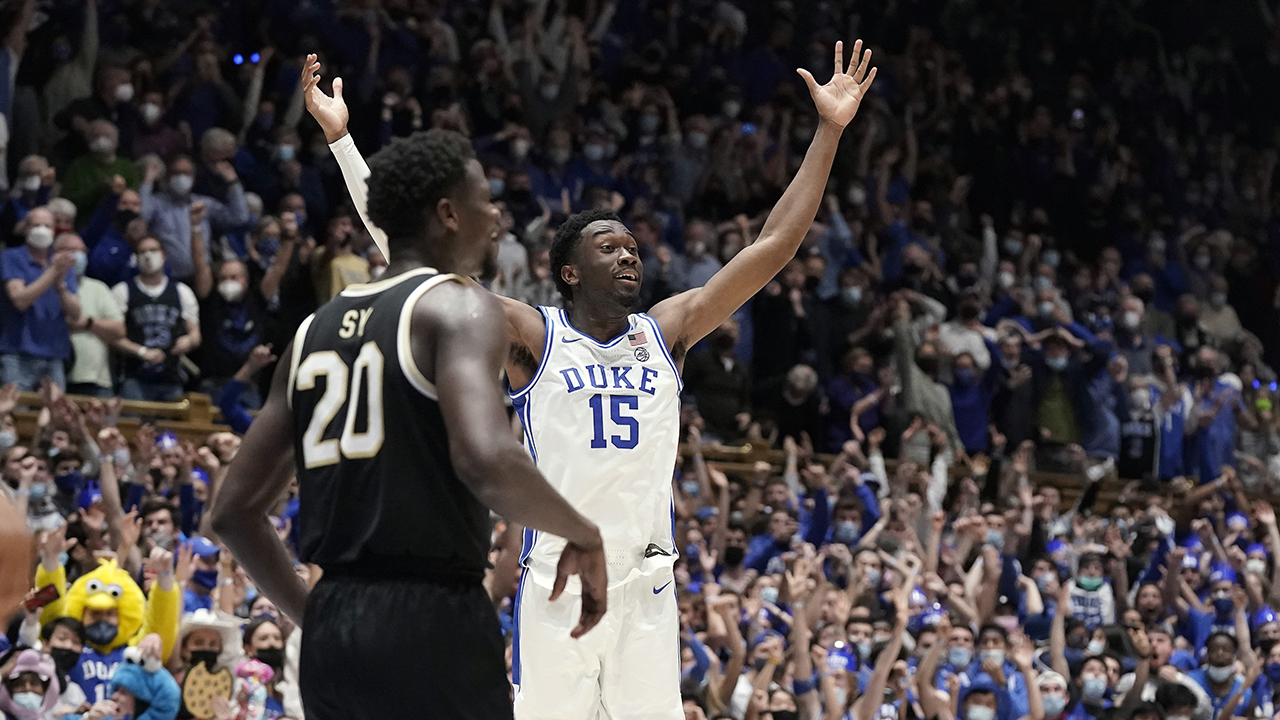 Duke's Mark Williams reacts after making the winning shot against Wake Forest on Tuesday in Durham.

Officials immediately signaled for a replay review to see if Williams had touched the ball on the rim. That led to a prolonged stoppage with officials at the monitor, with Duke's players near the sideline motioning to count the basket and Wake Forest's side waving off the basket.

"I didn't think it was goaltending," Williams said. "I thought I got it off the rim. ... It was a good game, a little scary obviously. But we found a way to win so that's the most important thing."

Officials finally signaled that the basket counted, sending a frenzied crowd erupting in a tension-releasing roar - only to nearly see Monsanto hit a shot that would have surely led to yet another review had it gone in.

Instead, the Blue Devils were able to celebrate, then Scheyer said Krzyzewski addressed the team afterward.

"He was still in the building and we got to see him for a few minutes," Scheyer said. "He was happy, but he needs to take care of himself right now and go from there."

Jake LaRavia had 19 points and 10 rebounds to lead the Demon Deacons, who lost for the 23rd straight time at Cameron. Williams, the ACC scoring and assists leader, finished with 18 points after being limited to fewer than 8 minutes due to three first-half fouls.

Krzyzewski's absence overshadowed much of the second half. After turning 75 on Sunday, he was dealing with an apparent issue roughly midway through the first half, holding his forehead while Scheyer and fellow associate head coach Chris Carrawell seemed to be checking on him from either side on the bench.

During a later timeout, trainer Jose Fonseca checked on Krzyzewski both at the beginning and the end of the stoppage. But by the end of the first half, Krzyzewski appeared to be fine, standing up to applaud or shout instructions to his players - only to not return after the halftime horn.

The Demon Deacons had already secured the program's first 20-win season since 2010 and are looking for even more in a remarkably fast turnaround under second-year coach Steve Forbes. They put the pressure on Duke with their second-half run, but ultimately their long streak at Cameron grew a little longer - with the last win coming in January 1997 during program great Tim Duncan's final season.

The Blue Devils entered the night tied with Notre Dame for the ACC lead after wins at Clemson and Boston College. They held on in this one with five players in double figures, including Banchero (13 points) and fellow freshman A.J. Griffin (12).

The Demon Deacons host Notre Dame on Saturday in a matchup of teams near the top of the league standings.