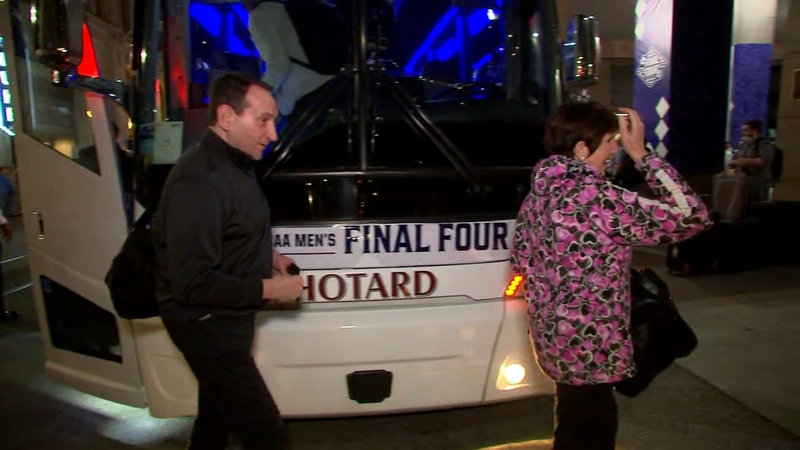 NEW ORLEANS -- Duke and North Carolina are taking their much talked about and often debated men's basketball rivalry on the road to a place it has never been.

The neighboring schools are preparing for another first in a series filled with big-name players and intense finishes: playing each other in the NCAA tournament. It seems fitting the matchup comes in the Final Four, with a berth in the championship game on the line.

It's an intriguing script for Saturday night's showdown in New Orleans.

FINAL FOUR: Coach K and the Duke Blue Devils arrive at team hotel in New Orleans ahead of Saturday night’s epic matchup with arch rival UNC. Live coverage from NOLA with me and @joemazurabc11 AT 11 #abc11 pic.twitter.com/4QZjp7D6JU

Duke ran North Carolina off its own court in the teams' first meeting this season. The Tar Heels exacted revenge by spoiling retiring Hall of Famer Mike Krzyzewski's final home game in what appeared to be their last battle with Coach K.

A third meeting wasn't something either wanted to talk about to start the week, not when Krzyzewski's Blue Devils were first to earn their spot to the Big Easy and not when Hubert Davis' Tar Heels followed a day later.

They have to now.

"To me, the thing is, I think we're going to have two really good teams play against one another," Krzyzewski said Tuesday, three days after beating Arkansas to claim the West Region title. "Whereas, the last two games we were better than them at that point and they were better than us at the other point. And now we'll see what happens."

The Tar Heels continued their second-half surge by beating underdog Saint Peter's on Sunday to win the East Region crown and reach an NCAA-record 21st Final Four despite being a No. 8 seed.

While Davis is surprised the teams have somehow never run into each other in the NCAAs, he shrugged off questions about the significance of the meeting beyond the chance to play for a national title.

"Duke-Carolina, the significance, Coach K's last season - those things, even though that it is a story, and that's relevant, it doesn't help us on the floor," Davis said. "So our focus is on what helps us on the floor, and it's our preparation, our practice and our play.

"I've told the guys, 'You've got to turn down or turn off the noise from the phone, the family, the friends and the fans. And focus on what's ahead of us.'"

The fierce rivalry between programs with a combined 11 NCAA championships has long been an annual must-watch event. It's a series featuring names like Jordan, Laettner, Hill and Jamison, among them. It also has had star power on the sideline, with Krzyzewski battling Hall of Famers like the late Dean Smith and Roy Williams before now facing a first-year coach in former UNC and NBA player Davis.

The teams had come close to this moment only once before, in 1991. That's when both the Blue Devils and Tar Heels reached the Final Four in Indianapolis.

But the Tar Heels, with Davis as a player and Smith the coach, lost the first semifinal to a Kansas team coached by Williams. Then Duke stunned everyone by beating undefeated and reigning national champion UNLV in the second game, creating a what-could've-been scenario as the Blue Devils went on to beat Williams' Jayhawks for Krzyzewski's first of five NCAA championships.

Now it's finally happening, but the script for Round 3 is unclear considering how wildly different the teams' two regular-season meetings ended.

The Blue Devils won the first by 20 points in February, dominating behind a star-level performance from freshman A.J. Griffin in particular. Duke looked sharp from the outset, rolling to a 31-8 lead while looking completely unbothered by a crowd booing relentlessly in its own farewell to Krzyzewski in his final trip to Chapel Hill.

By the end, they were celebrating 3-pointers and dunks in a preening performance on the Tar Heels' homecourt, sending fans fleeing for the exits with five minutes left. It was a performance that led junior Wendell Moore Jr. said afterward illustrated how his team loves big games and "being the villain."

The performance only further heightened questions about the Tar Heels' toughness and their lack of a competitive response in blowout losses to Tennessee, Kentucky, Miami and Wake Forest earlier in the season.

Yet their trajectory changed in the rematch to close the regular season, turning an improving team into one determined to prove its mettle in one of the game's toughest environments. And it came amid the pomp and heightened emotion with Krzyzewski's final game at Cameron Indoor Stadium that made it feel more like a spectacle than ever, starting with a pregame ceremony and photo with more than 90 of his former players.

The Tar Heels ignored all of it, playing instead with a fearless fire and confidence lacking in that first meeting.

Davis stuck with his five starters in a substitution-free second half that saw the Tar Heels shoot 59% and score 55 points. And by the end, the Tar Heels were celebrating a double-digit victory on "Coach K Court" and had Krzyzewski apologizing to the crowd in an awkward warm-up to the postgame ceremony in his honor.

It seems he was talking about this year's rivalry, too.