Battle for Victory Bell at center of intense UNC-Duke rivalry 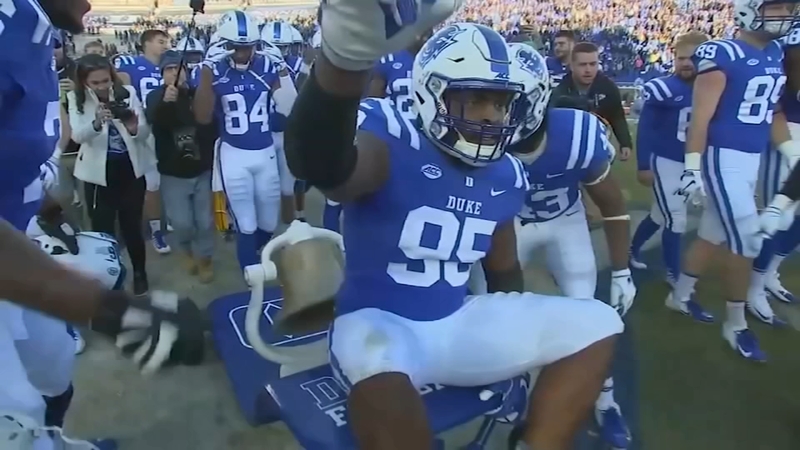 DURHAM, N.C. (WTVD) -- Saturday at Wallace Wade stadium, the 107th all-time showdown goes down between Duke and North Carolina. It has become a real rivalry since Jamison Crowder's fourth-down, game-winning catch back in 2012. More often than not, we get a very good game.

"You know, that really hurt us a lot. I think it's definitely just added that extra fuel to a rivalry that was already super intense," said Duke safety Michael Carter II. "They're going to come out with their best, and you know we're going to attempt to do the same."

Duke )1-5, 2-5) is fresh off a domination of Charlotte but head coach David Cutcliffe and his team know the Heels are an entirely different animal.

"I think it's our test. It's November, the team has matured now some," Cutcliffe said. "It's back into conference play where your real measure is taken. I think that's the biggest part of it."

It's a similar challenge for UNC (4-2, 4-2). Off another disappointment at Virginia, the Tar Heels continue to hunt for consistency.

Much of the battle figures to be up front. Line on line. Nothing pretty, just will. Just ask Duke's Rakavius Chambers.

"Rivalry games come down to who wants to be the most physical team and who's going to pound the other team for a longer period of time," Chambers said. "In practice, we've had some very physical practices, so I look forward to seeing this out there on the field on Saturday."

UNC defensive lineman Tomon Fox said he and his teammates still need to prove something away from Kenan Stadium.

"On the road, we've got to be more focused as a team as a whole," Fox said. "We've got to be able to get ready to go into somebody else's house and beat them in their own place."

Whoever winds up on top will have most certainly had to work for their spoils. Fans or not in Wallace Wade, someone's going to be riding and ringing the Bell.

Chambers has other plans.