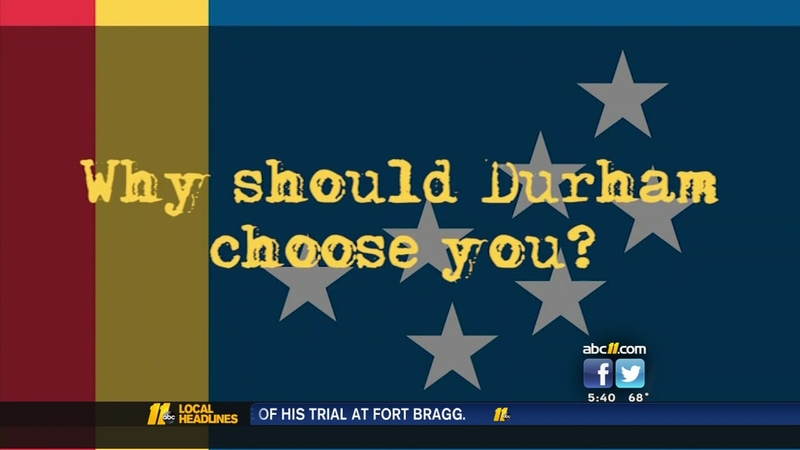 Durham Businessman Farad Ali and City Councilman Steve Schewel say they are both friends and fond of each other.

But with one week before the election, ABC11 asked the candidates why should voters choose one instead of the other?

Ali: "Crime is also a form of employment. We need to talk about trading in guns and giving people jobs. Let's understand that we can change communities by providing the jobs and opportunities for them to better themselves. It's incumbent upon the city that you collaborate and engage with people. You can collaborate with job-training programs. You may be orchestrating meetings with corporations."

Schewel: "We need to have a police force that works to prevent the gun violence that we are seeing in Durham and works very hard and effectively to do that. At the same time, that policing can never be discriminatory and never be racially profiling. Chief CJ Davis is a great chief. She has my 100 percent support. I think she is doing a lot of great things that are going to help build that trust."

Ali: "The strategies we've had are not working, so how do we expand that strategy? I was the first candidate to say create a trust fund that allows us to leverage the dollars that the city puts in, as well as the dollars we can raise from foundations and for profits and other people to invest in this fund - that can take us to create the capital necessary-not just for affordable housing, transitional housing, workforce housing, and homeownership."

Schewel: "We have a lot of public-owned land downtown, the county, the city and the housing authority has a lot of it. We need to use that public-owned land that we already own to leverage affordable housing, so the land can be part of the subsidy that enables you to build affordably."

Why should people choose you?

Ali: "I'm asking people to vote for me because I'm going to incorporate a One Durham Initiative. How do we help the least of us as well as engage the best of us?"

Schewel: "I think what we need in a mayor is somebody who is not going to try to solve all the problems himself or herself, because nobody can do that. We need someone who can bring people together."

As of Tuesday, more than 4,700 people have voted early, which is close to the amount of people who voted in the election primary.

The candidates have a debate forum Wednesday at 7:00 p.m., at the Rickhouse, 609 Foster St.