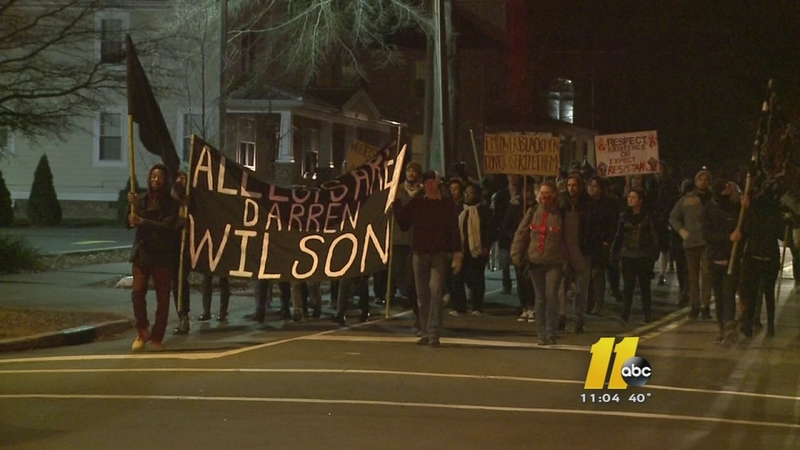 Durham police arrested 11 protesters in a Saturday night rally, while officers only observed protesters on Sunday afternoon. Both demonstrations were fueled by the same continuing theme seen all over the country -- both are against grand jury decisions handed down in the Eric Garner and Michael Brown cases.

Saturday night's protest started around 9:30 p.m. when about 50 protesters hit the streets of Durham. They banged on drums, chanted, waved signs and banners, while some of them had their faces covered with bandanas.

Durham police said the group blocked several streets, but when they hit Swift Avenue toward the Durham Freeway, police intervened and forced many protesters, who they said did not listen to warnings to disperse, to the ground to arrest them.

Charges vary for some of the protesters, but all are facing impeding traffic charges.

It was a much different outcome than Sunday's 2 p.m. protest hosted by church leaders in Durham.

"We're working in agreement with the police department, we want to make sure justice happens and the church takes responsibility to stand with communities to make sure we're doing the right thing," said Dr. James Spence, a local pastor.

A group of about 60 blocked the intersection of Hyde Park Avenue and Holloway Street for about 12 minutes, before marching toward Alston Avenue and finally dispersing.

Durham Police Chief Jose Lopez says he's not only concerned about the safety of protesters and the drivers stopped by recent demonstrations but also the impact it's having on taxpayers.

"Stopping a highway is a very dangerous and difficult thing to do," said Lopez, adding that the latest tally of officer overtime and staff resources to keep the peace could reach $30,000.

However, demonstrators won't be deterred. Another protest is set for Tuesday night in the heart of downtown.

The Carolina Jews for Justice will mark the first day of Hanukah in solidarity with the Black Lives Matter movement sparked by recent grand jury decisions in the cases of Brown and Garner.

"There's black folks who are walking around fearing police violence every single day," said Sandra Korn, with Carolina Jews for Justice. "It's important to make this point every single day until the system changes."

Korn was among a group of protesters on Dec. 5 who blocked the Durham Freeway. She says she was injured in the melee after an officer pushed her to the ground. Lopez offers a different account in a detailed report on the protest recently submitted to the city manager.

It says police are closely monitoring social media for organizers with an "anarchist mentality."

The report identifies a Chapel Hill-based group called the Prison Books Collection. The group's website is promoting a protest in Durham on New Year's Eve.

Activist Robert Stephens organized the recent protest at Southpoint Mall but denies any ties to anarchist groups, saying his only goal is to raise awareness.

"All of our protests are peaceful. We're not rioting. That's not what we're about," Stephens said. "We don't want to strain the public budget. But, we also realize that an individual life is priceless. You can't put money on someone's life."