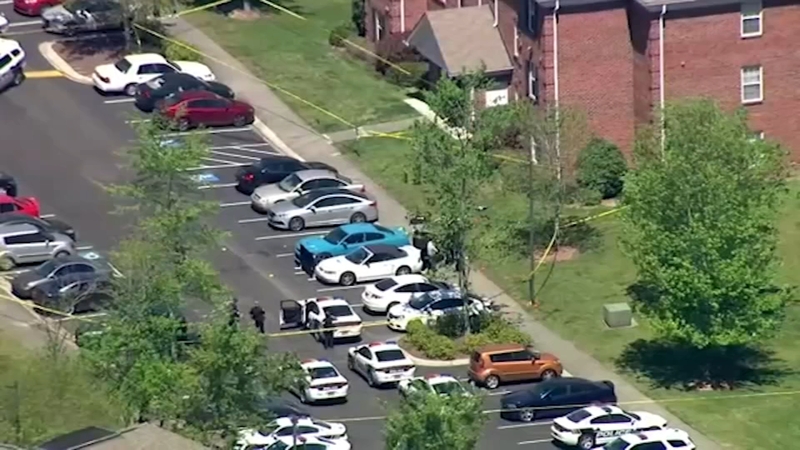 DURHAM, N.C. (WTVD) -- One person is dead and another injured in another shooting in Durham.

The call came in about 11:40 a.m. regarding a shooting at Cadence At RTP, an apartment complex popular among NC Central students in the 1400 block of East Cornwallis Road. It's the second deadly shooting there in the past couple of months.

Durham Police said that one person was pronounced dead at the scene. The second victim was taken to the hospital with what were described as life-threatening injuries.

Investigators said the shootings did not appear to be random.

Dazritae Saylor said she was at work when the shooting happened. She said her roommate texted her.

Multiple @TheDurhamPolice cruisers are blocking the entrance to the Cadence At RTP apartments. Two people have been shot and one person has died #abc11 @CityofDurhamNC pic.twitter.com/Py0y08miGS

"It's crazy considering (a shooting) just happened two months, and it was a fatality, too, actually so very crazy here," Saylor said.

She said she moved to the complex in 2019 and said it used to be mostly NC Central students -- but that has changed.

"It's very close, too close to home for us," Saylor said. "It's becoming unsafe considering the outside activity coming in. It's just not just school-related."

"I came to North Carolina to get away from troubled areas and troubled youth, and I thought this would be a good start considering we have NCCU, Duke and UNC-Chapel Hill, and it would be a new opportunity," Saylor said. "You can't even sit in your car and warm your car or cool it down with AC -- it's like you never know what will happen -- considering this happened in broad daylight."

One resident, who did not wish to be identified, said she heard about 14 gunshots.

Meanwhile, Pat Evans was out in the community on Friday. The timing of the shooting was not lost on Evans, who is up for reelection as Chief District Court Judge.

Person who lives at the complex told me she was home and heard 14 shots this morning. She was also home when 4 people were shot at the same complex two months ago #abc11 #Durham

"We have to figure out how to fix the problem," Evans said. "It's going to take the whole community. No one person has all of the answers, but I need to do my part, so I'm back out here trying to convince everyone that we can do this together."

The deadly shooting took place shortly after an event that was part campaigning and part talking to neighbors about gun violence and solutions to it.

Evans said they have outreach teams that are out during the day and night working to stop the violence.

"We cannot continue in this vein because Durham is in trouble," Evans said.

The deadly shooting took place shortly after an event that was part campaigning and part talking to neighbors about gun violence and solutions to it.