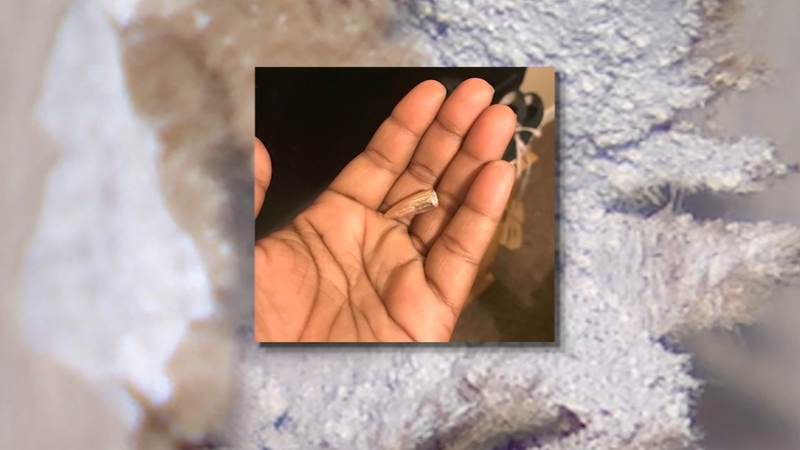 DURHAM, N.C. (WTVD) -- Durham mother Kearron Wilson was home with her three children Sunday evening when she said she heard what sounded like fireworks. Those sounds were actually gunshots coming from the parking lot of where she lives in the 300 block of Junction Road.

"I knew to get down on the floor," Wilson said. "And I crawled into my kids' room and laid with them."

On Monday morning, her 7-year-old daughter found a bullet inside the family's home.

A Durham mother is grateful her kids are alive today and not hurt after this stray bullet ripped through their home last night. #ABC11 pic.twitter.com/8dP9GlHkAf

"What do you say to a 7-year-old?" Wilson asked. "I saw the holes, but I did not want to acknowledge that to her. I did not want her to know anything else."

The bullet entered the building through the front of her neighbor's home before ripping through a shared wall adjacent to the stairs, the family's living room, and finally the kitchen.

"If it had hit anyone ... we would have been here for a different kind of call," she said.

Wilson thinks about her 5-year-old son, who is on the autism spectrum, and regularly makes trips up and down the stairs and frequents the refrigerator.

"It could have been a completely different story. If he had not been asleep at that moment, I would probably be sitting in a hospital right now," she said.

Wilson said it felt like Durham Police took longer than 30 minutes to respond after the first emergency call was placed. A DPD spokesperson told ABC11 that officers responded to a shot-fired call at 8:38 p.m. and arrived 12 minutes later, according to dispatch records.

Wilson said she hopes the person or persons responsible will be caught and wants anybody who witnessed the shots to come forward.

"See something, say something," Wilson said. "Say something. Because if you don't, you're going to regret it. Especially if something happens to you, Lord forbid."

Wilson said instead of thinking of Thanksgiving this week, she will be focused on finding a new place to live.