'Dancing with the Stars' sees first elimination of Season 29

"Dancing with the Stars" has its biggest cast ever for Season 29, but the number has been cut down after the first elimination of the season.
OTRC 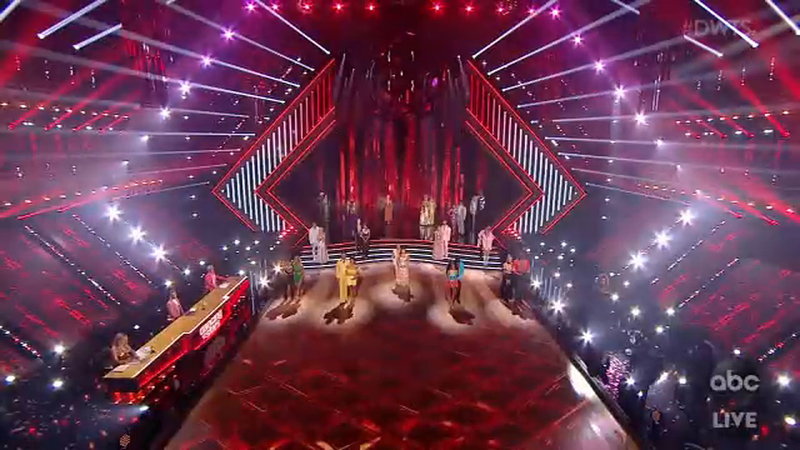 'Dancing with the Stars' sees first elimination of Season 29

LOS ANGELES -- Tyra Banks kicked off Week 2 of "Dancing with the Stars" by trying to teach the other celebrities how to do her "smiling with the eyes" trick. Good thing they quickly get to the dancing!

At the end of the show, we saw our first elimination of Season 29.

Here's a rundown of the Week 2 dances, from highest score to lowest:

Things were a little dicey with this pair. We didn't know if Kaitlyn would be able to dance because she sprained her ankle pretty badly. The doctor cleared her. She wanted to do it, so on they went! As for the judges, Carrie Ann Inaba said if that's the way you dance injured, she'd love to see the routine when she's 100%. Derek Hough feels like she is claiming her inner dancer, and he loves seeing that. And Bruno Tonioli thought she filled the space like a ballerina.

Justina was thrilled to land at the top of the judge's scorecard last week and can't wait to do it again. She says she's been a performer since she was little, and that means this show means more than she could have imagined. Derek called her a natural dancer; Bruno said she is lovely to watch because she dances from the heart.

Nev surprised a lot of people last week, including himself. Not only is he a good dancer, he's also enjoying this new experience. Derek called the performance solid; Carrie Ann said she was impressed; and Bruno likes his showmanship.

Jesse is a quick learner and he's confident in Sharna's teaching skills. He also admits to what we all see out there -- these two have chemistry. Carrie Ann likes his elegance and posture; Derek only had time to say "good job."

AJ says this classic tune is a favorite of his and his wife. They've been married for 10 years, have two kids, and the spark is clearly still there. He gets choked up talking about her, and calls his better half his superhero. Carrie Ann thinks his moves are smooth as silk; Derek called AJ a great showman; and Bruno said the rat pack would be proud!

Johnny's over the moon to be able to dance to a Lady Gaga song. Yes, he's a little monster. And, he's friends with her mom! The judge's comments were good overall, with Derek saying he likes the drama Johnny brings to the stage.

Anne says she promised her two sons that the goal of this whole thing would be not to embarrass them. In the "kid's say the darndest things" department, her son says he had no idea she'd be this good! Anne dedicates the dance to her two boys. The judges all praised the connection Anne and Keo have already developed. Bruno also complimented Keo on choreographing a tough routine, and Anne for doing it!

Rapper Nelly and pro Daniella Karagach
18 out of 30
Cha to "Let's Groove" by Earth, Wind & Fire

Nelly is quite proud of his backflip last week -- he's 45! He's also very proud to represent his hometown of St. Louis. He's working hard for them, and would love to add a mirror ball to his Grammy collection. Bruno praised his musicality and timing; Carrie Ann said he's fun and easy to watch on the dance floor.

We learn a bit more of Chrishell's back story this week, and it's rough. But growing up in poverty motivated her throughout her life, and she's bringing that to the ballroom. Carrie Ann felt like she saw a different dancer this week, and one who performed from the heart. Derek agreed there was more passion to her dancing, and Bruno also said he was impressed.

Super Bowl Champion Vernon Davis and pro Peta Murgatroyd
18 out of 30
Paso Doble to "We Found Love!" by Rihanna and Calvin Harris

Vernon's "athlete mentality" has taught him how to go for it and achieve his goals. Dancing may seem like it's out of the box, but not for him. Put a challenge in front of this guy and he's on it! Bruno said he can't wait to see more from this duo; Carrie Ann gave the advice to dance bigger, and with more intensity.

Talk show host Jeannie Mai and pro Brandon Armstrong
18 out of 30
Cha Cha to "Roses" by SAINt JHN
Jeannie said she was happy with week one responses until she got a message from her mom who wants her to do better. Her mom is her harshest critic, but also her best friend. Mom is sure to be proud/ Carrie Ann saw a big improvement over Week 1. Derek appreciates her energy and charisma. And Bruno likes the way these two play off each other.

Carole gets a bit teary when she talks about how she's had to learn to deal with negative press since "Tiger King." It's been especially hard on her on family, and hopes the show can help her show another side to herself than what media has portrayed. Derek applauded her improvement; Bruno called it a shining performance; and Carrie Ann thought the dance suited her and let us see her grow and evolve.

Monica brings hard work and determination from the cheer world. The judges can see her commitment, but clearly want to see more. Bruno thinks she projects joy, but needs to work on her timing. Carrie Ann saw a more relaxed dancer this week.

DWTS' youngest star lets us know she's been in the spotlight since she was 9-months-old. Cameras and spotlights don't faze this young woman! Unfortunately, she and Alan have a major mess-up during the routine this week. All three judges try to make her feel better and let her know this kind of thing happens to everyone. Derek told her a setback means a comeback!

Former NBA superstar Charles Oakley and pro Emma Slater
15 out of 30
Cha Cha to "Never. Too Much" by Luther Vandross

It's tough on any pro when her celebrity is a former NBA player and at least 6 foot 6 inches tall! Emma tells Charles to embrace his height, and not shrink away from it. Derek felt Charles improved, especially with his timing. And Bruno called him "Cha Cha Charles"!

They do a quick rundown of who is safe for another week, and we end with Carole Baskin and Charles Oakley in the bottom two. The judges decide which of these stars will be eliminated, and the axe falls on Oakley.