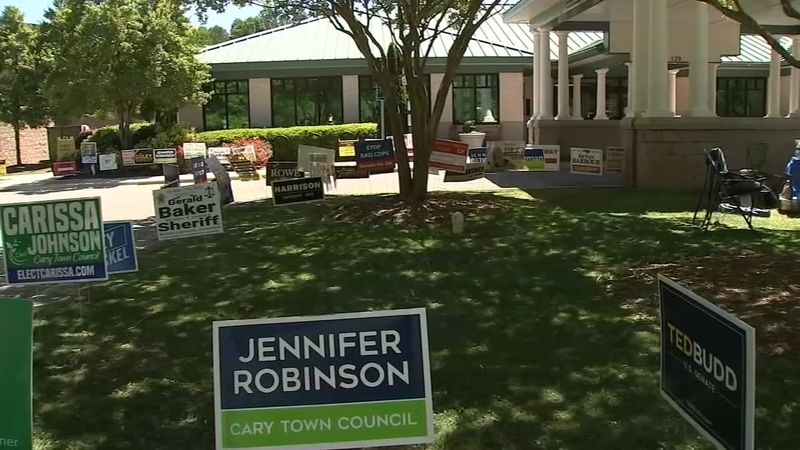 "It moves mountains. There's things that you want, and there's things you're hoping to get, and it's important. And the only way to get them is to vote," early voter Joyce Daye said.

"It still makes me feel that I gave my opinion as to who I want in there," first time North Carolina voter Audrey Miller said.

"This is the most important thing we can do for our democracy. If we do not vote for the right people, meaning people who will do good for our country, nothing will be done," voter Alex Chakrabarti added.

Voters who spoke to ABC11 on Tuesday shared a number of issues that motivated them to cast their ballots this year.

"(Topics) across the board, but I am really, really concerned about affordable housing. I am concerned about that. So I did read about all the candidates' (positions)," Daye said.

"All of those things, inflation, abortion, everything," Miller added.

Through Monday, there were more than 282,000 votes accepted, with the figure on track to potentially eclipse the 2018 primary early voting turnout by the end of Tuesday.

"2018 was a blue moon election. We didn't have any major statewide races, like a US Senate race, so that may be comparing apples to oranges. But we seem closely tacking what we did in 2020, which was a presidential primary year. So this could be a very interesting dynamic to continue to watch to see what happens through Saturday heading into next Tuesday's primary election," Catawba College political science professor Dr. Michael Bitzer said.

The vacant Senate seat, a first in North Carolina since 2004, has drawn several challenges and millions of dollars worth of spending and campaign advertising, with the Republican primary in particular drawing national attention. While Bitzer said Democrats and Republicans are coming out at roughly the same rates, unaffiliated voters, which are the largest voting group in the state, have largely chose to vote in the Republican primary. In North Carolina, unaffiliated voters are allowed to pick which primary they wish to vote in.

"That's not to be surprising or unexpected. Generally the race that has the greatest competitiveness at the top of the ticket tends to attract the most unaffiliated voters to that particular race," Bitzer said.

While the Senate race has garnered the most attention, there are several congressional races which are expected to be competitive, and have seen elevated turnouts.

"In terms of the overall statewide dynamics, there are three congressional districts that are making up about 1/3 of all the early votes that (have been) cast so far. Leading the pack is the North Carolina 11th, with that competitive Republican battle going on between Madison Cawthorn and state Sen. Chuck Edwards, and a number of other Republicans. The other two districts are the North Carolina 4th and North Carolina 1st. And they are both open seat elections being held for those two contests. They both make up each about 10% of all the ballots that have been cast so far. So the other districts have really not been as engaged in getting the number of votes as those three congressional districts," said Bitzer, who believed NC-1 and NC-13 could be the two most competitive congressional races in November.