Wake County students could get day off for Muslim holiday 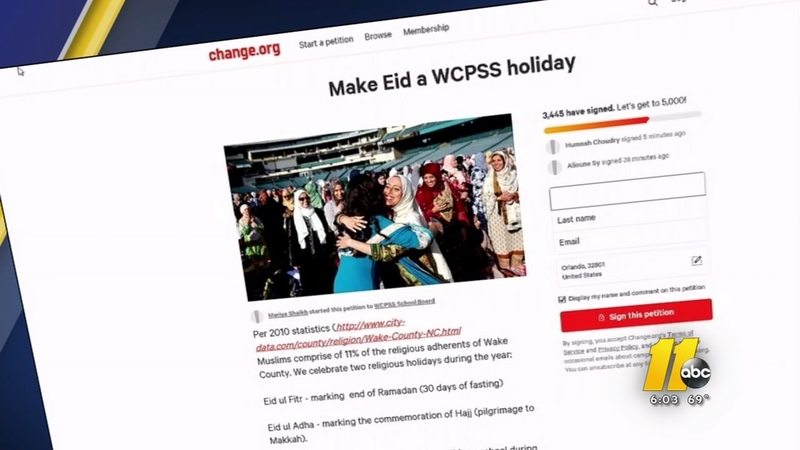 Wake County students could get day off for Muslim holiday

WAKE COUNTY, N.C. (WTVD) -- Wake County students could soon get the day off for a Muslim holiday, which would be considered a teacher workday.

Mariya Shaikh, whose three children go to Wake County Schools, created the petition, and said a calendar committee for the district added Eid Al-Fitr to the 2020-2021 draft calendar as a teacher work day.

"Now it means our kids don't have to choose between going to school or celebrating the holiday with their family," Shaikh said. "When kids are younger, in pre-school, kindergarten maybe it's easier to take the day off from school but as they get into older grades, especially when they're getting towards EOG testing time, or they're getting into high school, you miss a lot of instruction time if you don't go to school."

Shaikh said the Jewish holiday of Yom Kippur and two Hindu holidays were also recommended for the calendar.

According to the Association of Religion Data Archives, there were just over 900,000 people in Wake County in 2010 and more than 10,000 or just over one percent were Muslim.

"We're the academia," Shaikh said. "We're business owners. We contribute to this economy. We're a thriving segment of the population. And we're at that level where we're large enough to be recognized. We have a lot of kids in the public school system who are impacted with these choices that they have to make so I think it's high time that the board listens to us."

A spokeswoman for Wake County Public School System said they want the calendar to be a reflection of the community.

She said the draft calendar will go to the board in February for a vote.
Report a correction or typo
Related topics:
educationwake countyeducationholidaymuslimsschool
Copyright © 2021 WTVD-TV. All Rights Reserved.
TOP STORIES
Biotech company Amgen to create 355 jobs in Wake County
LATEST: Some vaccine sites in NC to offer $100 cash cards
At least 20 shots fired in shooting outside Wendy's in Carrboro
2021 hurricane season starts quiet after record-setting 2020
US hits 70% vaccination rate -- a month late, amid a surge
NY Gov. Cuomo sexually harassed multiple women: Probe
Show More
Some used cars currently cost more than their newest models
WCPSS needs more school bus drivers
Officer dead after burst of violence outside Pentagon
Wake school board to vote on mask mandate
These 2 states made up 1/3 of all US COVID cases this past week
More TOP STORIES News