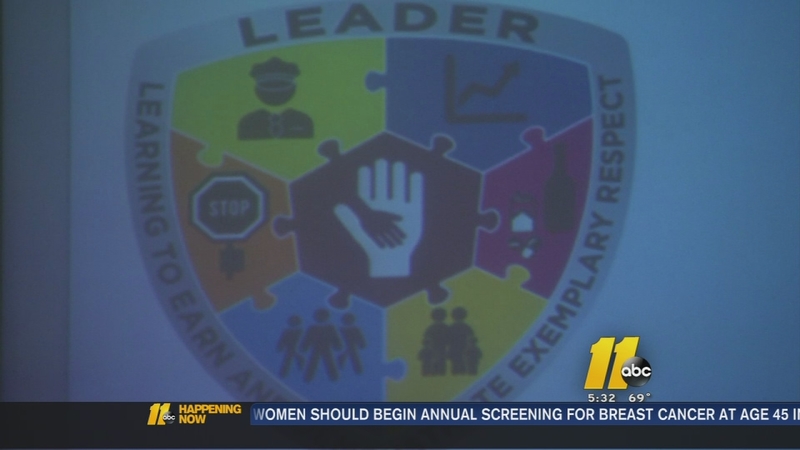 Tuesday, it was replaced by what officials say is a more modern and relevant program called "LEADER" after a casual conversation between Raleigh's police chief and the superintendent of Wake County Schools.

LEADER - the replacement for DARE - debuts at Stough Elementary in Raleigh. #ABC11Eyewitness pic.twitter.com/3bCyqP3PQf

"DARE had served its purpose. And in meeting [with school officials] we found common ground and an opportunity to bring something more relevant", said Raleigh Police Chief Cassandra Deck-Brown who helped announce the new program at Raleigh's Stough Elementary School Tuesday.

LEADER stands for Learning to Earn and Demonstrate Exemplary Respect.

Raleigh Police officer Vince Doxbeck is teaching the LEADER class at Stough. Tuesday during the class for fifth graders, he was engaging.

The students answered, "Us!"

"You guys, yes! We're a team", he told the kids and added, "And as a team we make this whole thing work. There's so many people out there that if we work together we can serve all the people of this amazing country we live in. And that's the whole idea behind this program."

The superintendent of the Wake County Public School System, Dr. Jim Merrill, was also enthusiastic about the new program.

"Rather than focusing simply on the what not to do, the program will help students know what to do when, for example, confronting a bully, dealing with an internal family crisis, or setting goals for their future," Merrill said.

Fifth grader Angelina Goussakov has only attended two LEADER classes but already has a handle on the program.

"We learned about what to expect in the leadership program. And we talked about how we can we can be a better citizen for our community," she told reporters.

"It would be very helpful because there is a lot of bullying in schools and just a lot of things that need to be taught that's not inside the school," the mother of a kindergartener said.
Back in the classroom, Vince Doxbeck was prodding students.

"Yeah, life is a roller coaster," he told them. "It gets kind of crazy - up and down, twists, turns, and we said 'Listen, we've got to stay on track.'"

And having youngsters see a police officer up close and personal is one of the things most relevant about LEADER according to Raleigh's police chief.

"It's talking about police and the role of the police officer," Deck-Brown said. "And today that has tremendous value in our society."

Parent Hugh Flanagan agreed saying, "It's important that kids are not afraid of police and are willing to engage them and look up to them as the role models that they should be."

Right now, the LEADER program is only in the 44 elementary schools within the Raleigh city limits since it's being taught by the Raleigh Police Department.

Wake schools superintendent says if the program is successful he may consider expanding it to all elementary schools.