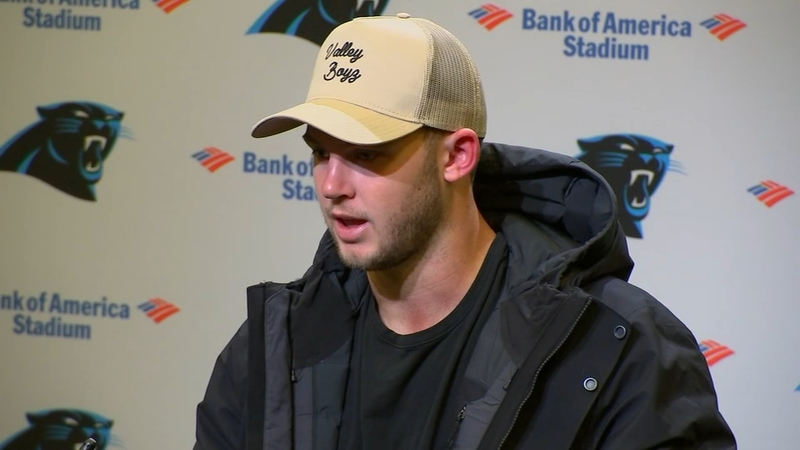 But he said it's a little bittersweet.

"This was the defense we expected to be playing from the start of the season," Oliver said.

If they had, things might be different this season for the Falcons.

Atlanta had one of the worst defenses in the league the first eight games of the season, which played a big role in a 1-7 start. But over the past two weeks the Falcons have been nothing short of dominant, allowing just four field goals and no touchdowns.

On Sunday, Atlanta intercepted Kyle Allen four times and sacked him five times, Kenjon Barner returned a punt 78 yards for a touchdown and the Falcons defeated the Carolina Panthers 29-3 for their second straight lopsided win against an NFC South foe.

The Falcons upset the Saints 26-9 the week before.

The Falcons (3-7) had only two interceptions all season -- and none since Week 2 against the Eagles -- but intercepted Allen three times in the first half to build a 20-0 lead.

Oliver said the exasperating thing is the Falcons aren't doing anything different defensively the past two weeks since returning from the bye week.

"Defensively, we have the same players on the field, we're calling the same calls we have been calling, running the same defense -- it's just working better, honestly," Oliver said. "Guys are communicating more and getting to the ball quicker. But in terms of the schemes, everything is the same."

For Matt Ryan, it was business as usual against the Panthers.

Ryan improved to 7-1 in his past eight starts against Carolina, throwing for 311 yards including a 6-yard touchdown pass to Calvin Ridley.

Ridley found huge holes in the Carolina defense, finishing with eight catches for 143 yards and rookie Qadree Ollison added a 2-yard TD run for the Falcons, who won despite playing without running back Devonta Freeman and tight end Austin Hooper.

The Panthers (5-5) appear to be headed in the other direction.

They have lost three of their past four games with Allen under center, who is suddenly struggling with turnovers.

The second-year QB has thrown nine interceptions in the past four games, after not throwing any in his first four career starts. He spent most of the game under heavy duress, as the Panthers offensive line racked up holding penalties nullifying big gains.

"He's a good young football player, and he's done some really good things for us," Panthers coach Ron Rivera said of Allen. "But today he got overwhelmed."

Allen said it boiled down to "poor decision-making" on his part.

He didn't get much help. Along with the lack of pass protection, the Panthers were penalized eight times for 68 yards which prevented them from mustering any momentum on offense.

"We stunk. We played terrible," Olsen said. "We got beat in all aspects of the game. Penalties, turnovers, drops -- it was like every single drive. It's impossible to play football like that."

The Falcons dominated in every phase of the game, including special teams.

Barner, who was drafted by the Panthers in 2013, gave Atlanta the boost it needed when he fielded Michael Palardy's punt and weaved his way up the field, picking up blockers along the way en route to an early 10-0 lead. It was the first punt return allowed by the Panthers since 2016.

Palardy appeared to outkick his coverage.

"I had a motorcade in front of me," Barner said with a laugh. "Our guys did a great job of blocking."

Christian McCaffrey finished with 191 yards from scrimmage but failed to score for the first time since Week 2. Still, he passed LaDainian Tomlinson (238) for the most receptions by a running back in his first three NFL seasons.

Trailing 26-0 late in the game, Rivera elected to go for a field goal instead of a touchdown.

"You don't want to get shutout, especially at home," Rivera said. "So you kick the field goal and take the points. At the end of the day at least you can keep your head up over something."

Falcons: Takk McKinley injured his shoulder on a first-half sack of Allen and did not return.