Fauci reacts to Trump's vaccine comments: 'I hope he keeps it up' 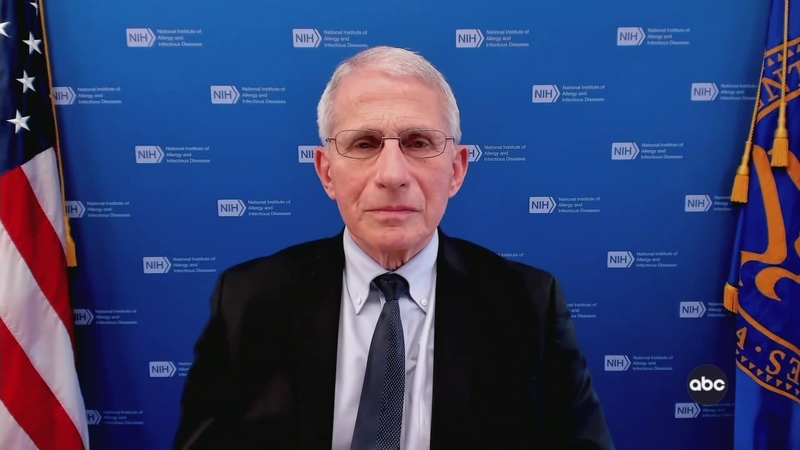 "Every day it goes up and up. The last weekly average was about 150,000 and it likely will go much higher," Fauci told ABC "This Week" co-anchor Jonathan Karl.

While Fauci said studies show omicron is less severe in terms of hospitalizations, he stressed, "we don't want to get complacent" because "when you have such a high volume of new infections, it might override a real diminution in severity."

"If you have many, many, many more people with a less level of severity, that might kind of neutralize the positive effect of having less severity when you have so many more people," he explained. "And we're particularly worried about those who are in that unvaccinated class ... those are the most vulnerable ones when you have a virus that is extraordinarily effective in getting to people."

But the omicron surge created a massive rush for tests as Americans prepared to see relatives for the holidays, and they instead faced empty pharmacy shelves and massive test lines.

"I don't think it's a failure," Biden replied in the exclusive interview. "I think it's -- you could argue that we should have known a year ago, six months ago, two months ago, a month ago."

President Joe Biden sat down with ABC News' David Muir for an exclusive interview and addressed the possibility of running for president again in 2024.

"I wish I had thought about ordering" 500 million at-home tests 'two months ago,'" he told Muir.

Biden added "nothing's been good enough" when it comes to the availability of at-home tests.

When Karl asked about the comments, Fauci admitted to "This Week" he is frustrated with at-home test availability and said "we've obviously got to do better."

"The beginning of the year, there were essentially no rapid point of care home tests available. Now, there are over nine of them and more coming," Fauci said. "The production of them has been rapidly upscaled, and yet because of the demand that we have, which in some respects, Jon, is good, that we have a high demand because we should be using testing much more extensively than we have."

"But the situation where you have such a high demand, a conflation of events, omicron stirring people to get appropriately concerned and wanting to get tested as well as the fact of the run on tests during the holiday season -- we've obviously got to do better," he continued. "I think things will improve greatly as we get into January. But that doesn't help us today and tomorrow."

"Is this really the breakthrough that you've been waiting for?" Karl questioned.

"That's part of the comprehensive approach to this outbreak. Vaccines and boosters, masks and now very importantly, a highly effective therapy is really going to make a major, major difference," Fauci replied. "We've just got to make sure that there's the production of enough of that product that we can get it widely used for those who need it as quickly as possible."

"I assume that will be a top priority going forward, right? I mean, possibly including Defense [Production] Act ... and the like?" Karl pressed.

"Absolutely, Jon, absolutely," Fauci said. "We've got to get that product into the mouths of those who need it."

Only 61.7% of the U.S. population is fully vaccinated against COVID-19, according to CDC data. Many Americans remain against COVID-19 vaccines over one year into their use.

Karl asked Fauci whether Trump's supporters might listen to that message.

"I think that his continuing to say that people should get vaccinated and articulating that to them, in my mind is a good thing. I hope he keeps it up," Fauci responded.

Fauci also said he was surprised when Trump was booed by some of his supporters in Texas last weekend after the former president revealed he'd gotten his booster shot.

"I was stunned by that," Fauci said. "I mean, given the fact of how popular he is with that group, that they would boo him, which tells me how recalcitrant they are about being told what they should do."
Report a correction or typo
Related topics:
health & fitnessdonald trumpcoronavirusabccovid 19 vaccineu.s. & worldanthony fauci
Copyright © 2022 ABC News Internet Ventures.
COVID-19 VACCINE
Pfizer: COVID vaccine for kids 6 months to 5 years old 80% effective
Parents share mixed reactions over plans for boosters for children
CDC director signs off on booster shots for children ages 5 to 11
2 years into COVID-19, some remain in complete isolation
TOP STORIES
New NC flood monitoring system ready for next big storm
Homeless veterans get an assist from Durham's Rotary Club
Shelf cloud seen in Raleigh ahead of line of storms
Truck slams into NC woman's new home
Father puts 1,000 miles on his car to find specialty formula
Student says he was told not to mention 'Don't Say Gay' law in speech
Clayton police arrest man in shooting that injured 1
Show More
More than 75,000 pounds of baby formula lands in US amid shortage
Report: Top Southern Baptists stonewalled sex abuse victims
Arby's is selling a fast-food staple it's never offered before
Biden: US would intervene with military to defend Taiwan
Wake County begins giving COVID booster shots for children ages 5-11
More TOP STORIES News