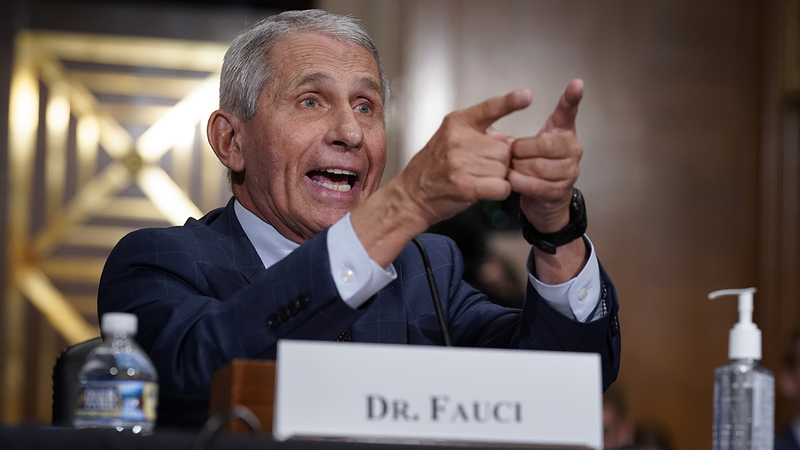 WASHINGTON -- GOP Sen. Rand Paul on Tuesday stepped up his months-long fight with the nation's top infectious disease expert, Dr. Anthony Fauci, suggesting he lied to Congress about whether the National Institutes of Health funded gain-of-function research at the Wuhan Institute of Virology, and triggering an angry shouting match.

At a Senate Health Committee hearing meant to update lawmakers on the country's COVID-19 response, the Kentucky Republican began by asking Fauci, director of the National Institute of Allergy and Infectious Diseases, if he's aware that it's a crime to lie to Congress.

"On May 11, you stated that NIH has not ever and does not now fund gain-of-function research in the Wuhan Institute of Virology," Paul said. He claimed that gain-of-function research -- which could, in theory, enhance the transmissibility of a virus -- was performed in the lab and referred to an academic paper by a Chinese scientist, which he then asked to be entered into the record and for a copy to be given to Fauci.

"Dr. Fauci, knowing that it is a crime to lie to Congress, do you wish to retract your statement of May 11, where you claimed at the NIH never funded gain-of-function research and move on?" Paul said, repeating his unsupported accusation.

A team assembled by the World Health Organization recently visited Wuhan to research where COVID-19 came from, but it could be years before there are clear answers about how the outbreak started.

"Sen. Paul, I have never lied before the Congress. And I do not retract that statement," he said.

Paul suggested Fauci and the NIH could be partly responsible for the pandemic and the deaths of 4 million people worldwide.

The virology expert explained that the paper Paul referenced does not represent gain-of-function research, and when Paul interrupted, the shouting match ensued.

Continuing their ongoing feud, the two argued over the definition of gain-of-function. NIH Director Francis Collins, in a statement earlier this year, warning of misinformation, said, "neither NIH nor NIAID have ever approved any grant that would have supported 'gain-of-function' research on coronaviruses that would have increased their transmissibility or lethality for humans."

But Paul would not be swayed.

"You're dancing around this because you're trying to obscure responsibility for four million people dying around them from a pandemic," Paul said.

"I totally resent the lie that you are now propagating, senator," Fauci said. "If you look at the viruses that were used in the experiments, that were given in the annual reports, that were published in the literature, it is molecularly impossible--"

"You are implying that what we did was responsible for the deaths of individuals. I totally resent that," Fauci said.

Paul interrupted, "It could have been."

"If there is any lying here, senator, it is you," Fauci shot back, pointing his finger at Paul.

With Paul's time expired, the lawmaker up next, Sen. Tina Smith, D-N.M., gave Fauci the chance to "counteract these attacks on your integrity that we've all just witnessed."

"I don't think I have anything further to say," Fauci said. "This is a pattern that Sen. Paul has been doing now at multiple hearings based on no reality. He keeps talking about gain-of-function. This has been evaluated multiple times by qualified people to not fall under the gain-of-function definition.