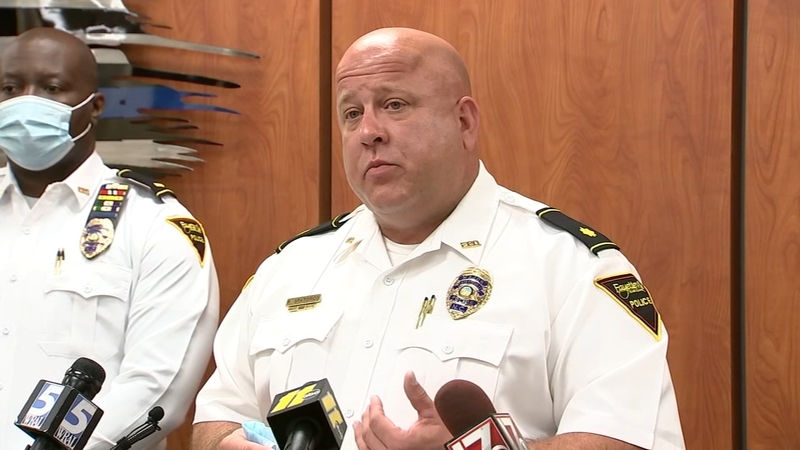 Maj. Robert Spatorico from the investigative unit emphasized two cases where drivers were victimized and their vehicles have not been recovered.

On October 20, at 12:05 a.m., a man was robbed of his vehicle at gunpoint in the area of the Lagrange Subdivision. The vehicle, a white 2020 Nissan Versa with NC license plate HDT-7629 has not been recovered.

Fayetteville Police held a news conference Wednesday morning to highlight what it called a "violent robbery trend" involving carjackings in the city.

On October 27, at 9:25 p.m., officers responded to the 3600 block of Dornoch Drive in reference to a shooting and carjacking. The victim's vehicle, a gray 2020 Toyota Corolla with Pennsylvania license plate JGZ7911, remains missing.

On October 31, a 14-year-old girl was injured in a shooting during a carjacking around 8:40 a.m. at an apartment complex on Willowbrook Drive.

A 14-year-old girl was injured in a shooting during a carjacking Saturday morning, police said.

Officers were also dispatched to a white Dodge Journey found abandoned after crashing into a tree in the 7000 block of Candlewood Drive.

Police said the two incidents were related. The 14-year-old was taken to Cape Fear Valley Hospital.

There was also a carjacking on October 29 in the 400 block of Regency Drive just before 8:20 p.m.

In that case, a man had been shot multiple times in the parking lot of an apartment complex. Officials said the shooting suspect approached the man as he was getting out of his vehicle, shot him, and then stole the victim's vehicle, a maroon-colored 2014 Hyundais Sonata with NC license plate HFP-8648.

The Fayetteville Police Department said the victim was taken to the hospital with serious injuries.