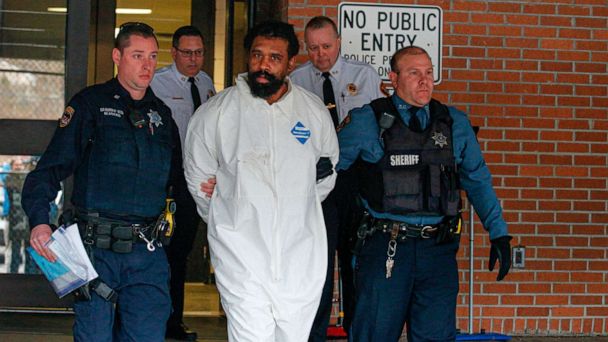 Federal prosecutors have filed hate crime charges against the 38-year-old man suspected of stabbing five people with a machete at a Hanukkah celebration in a New York City suburb on Saturday night.

At the Greenwood Lake, New York, home of Thomas, investigators recovered journals which had anti-Semitic sentiments including references to Hitler and "Nazi Culture" "on the same page as drawings of a Star of David and a Swastika," according to the federal complaint.

The day of the machete attack, Thomas' phone was allegedly used to access an article titled, "New York City Increases Police Presence in Jewish Neighborhoods After Possible Anti-Semitic Attacks. Here's What To Know."

On Thomas' phone were searches including "Why did Hitler hate the Jews," according to the complaint.

The complaint describes that in writings found in Thomas' journal, he showed an interest in the Black Israelite movement, a group that espouses hatred toward Jews and is known for anti-government and anti-police sentiments. The alleged killers in the Jersey City shootout at a Jewish supermarket on Dec. 10 described themselves as followers of the Black Israelite movement.

When asked if Thomas is involved in the Black Israelite movement, his defense attorney Michael Sussman said Monday, "I can't answer that question definitively. I heard nothing from him which suggested any association."

Thomas' family has denounced the crime and said he has no ties to any hate groups.

"Thomas has a long history of mental illness and hospitalizations," the family said in a statement issued Sunday night. "He has no history of like violent acts and no convictions for any crime. He has no known history of anti-Semitism and was raised in a home which embraced and respected all religions and races. He is not a member of any hate groups."

At a news conference, Sussman stressed Thomas' "severe psychiatric issues" and said a psychological evaluation should be conducted immediately.

Sussman said Thomas had voices in his head, "which is not unusual for people suffering from his level of psychosis."

"He seemed to indicate there was a direction he was following that evening," Sussman said. "His explanations were not terribly coherent."

"I heard nothing in that conversation that confirmed in anyway shape or manner that he is a domestic terrorist," Sussman said, adding that he was celebrating Hanukkah on the night of the attack.

Thomas' family added in its statement, "we believe the actions of which he is accused, if committed by him, tragically reflect profound mental illness."

There were about 100 people at Rabbi Chaim Rottenberg's Monsey, New York, home at the time of Saturday's attack.

The rabbi's home is attached to the ultra-Orthodox Hasidic Jewish congregation's synagogue and he was hosting a ceremony to light the candle on the seventh night of Hanukkah when Thomas allegedly ran in, swinging a knife.

Five people were hurt, including one man who is in critical condition with a skull fracture, and one person who suffered a severed finger, officials said.

Josef Gluck, manager of the synagogue, said he was sitting in the dining room with 40 to 50 people when the intruder barged in wearing a hoodie and a scarf covering all of his face except for his eyes.

Thomas allegedly said to the victims "no one is leaving," took out a machete and started stabbing and slashing people, according to the federal complaint.

Thomas was arrested in Harlem after driving away from the scene, according to police.

A witness had given authorities the suspect's license plate number, so when license plate readers indicated the 2015 grey Nissan Sentra was in Harlem, officers searched block by block until Thomas was located. He was covered in blood and had an 18-inch machete with apparent dried blood on it in the car, authorities said.

Thomas was arraigned on Sunday and charged with five counts of attempted murder and one count of burglary, police said. He pleaded not guilty and is being held on $5 million bond at the Rockland County Jail.

Thomas' family extended sympathies to those injured, saying, "[W]e express our deepest concern and prayers for those injured physically and otherwise deeply affected by the events of Saturday night and our family's earnest yearning for their well being. We thank those who rendered medical attention to each of those injured."

Gov. Andrew Cuomo called the attack "an act of domestic terrorism." The stabbings, just north of New York City, came at the end of two weeks of increased anti-Semitic attacks in the city. The NYPD was investigating nine attacks against Jewish individuals prior to the stabbings. It is not clear if any are related.

Around-the-clock armed security is being implemented in Rockland County for an undetermined amount of time to give peace of mind to the Jewish community, county officials announced Monday.

"We are fighting back as a community," Patrick Brosnan, CEO of Brosnan Risk Consultants, which is leading the armed patrol, told reporters.

Brosnan said he raised his family in Rockland County and lives about eight minutes from the scene of the crime, which he called a "disgusting, reprehensible" act.

"We cannot sit around and do nothing," he said. "We are taking proactive action."

Thomas made a brief first appearance in federal court on Monday afternoon. He returns to court for the attempted murder charges on Friday.