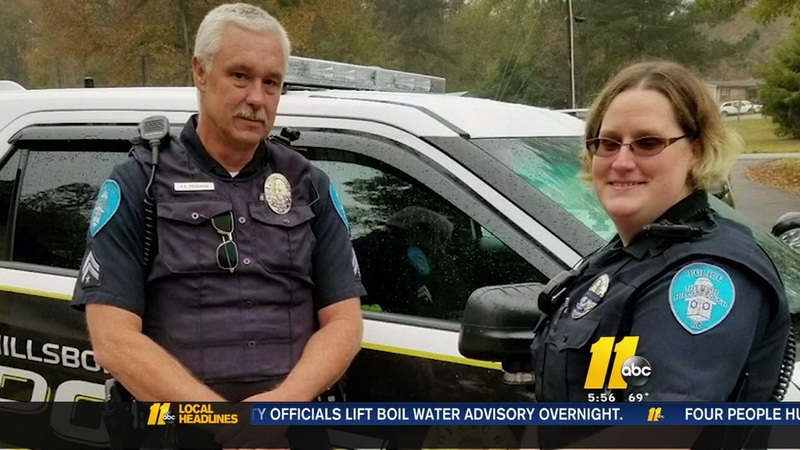 HILLSBOROUGH, North Carolina (WTVD) -- Theresa West is 44 and facing a larceny charge. The beleaguered mom was arrested Sunday afternoon and will go to court next Monday.

Until then, she and her children will be able to enjoy one of life's simple necessities thanks to two Hillsborough police officers.

Corp. Keith Bradshaw and his partner decided they were not going to just catch a thief but make a difference in a struggling mom's life.

"Sometimes helping isn't just writing that ticket or arresting someone," Bradshaw said. "Sometimes, you have to think outside that box."

It all started when the police officers were called to a Food Lion. Someone stole a couple of loaves of bread, Ragu sauce, pasta, and Caesar salad packets.

Authorities were able to track down their culprit after reviewing surveillance video. A camera captured a car tag and officers were able to locate a home address.

Once officers found West's mobile home, she broke down.

"She kind of hung her head and told us what was going on and why and that she was sorry," Bradshaw said.

West told the officers she and her children hadn't eaten in three days.

Bradshaw asked to go in the kitchen and take a look for himself. He opened the refrigerator and freezer doors. He only found one item.

"I seen just cheese; it was like "wow," Bradshaw said.

West was taken to town to be booked and while the paperwork was being filled out, Bradshaw and his partner started their mission to help.

They went to a grocery store and started loading up their carts. The officers spent $140.

Not only did these officers step in to help, but so did the magistrate who snapped a picture.

"He said 'Hey I called my mom and we put a box together. Can y'all come by and get it?" explained Bradshaw.

By the time West made bail and returned home, there were bags of food.

"It was just a lot of hugging and crying from her and thankfulness," Bradshaw said.

The officers saw this as an opportunity to help the community in a meaningful way.

"I still have to do my job as an officer, but it doesn't mean I can't go that extra mile after that charge to continue helping in a positive manner," Bradshaw said.