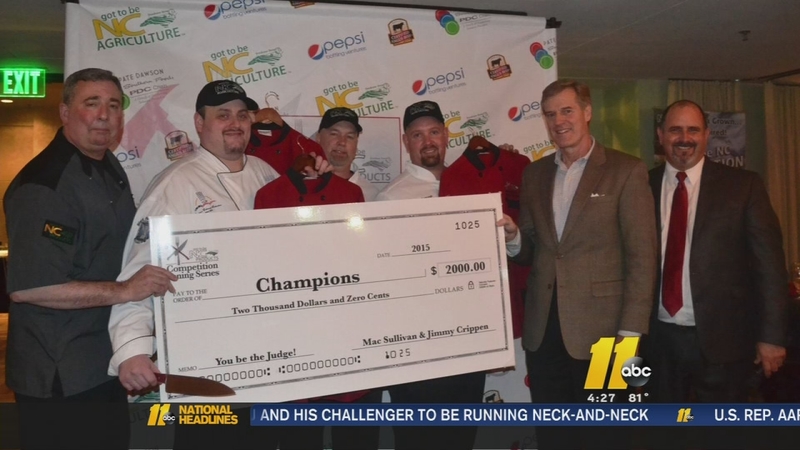 RALEIGH (WTVD) -- A local chef and his team have won a competition dining contest that pitted 16 teams from top notch restaurants against each other.

However, what makes this most remarkable is that these winners weren't actually from a restaurant; instead they're all chefs at Rex Hospital.

Executive Chef Ryan Conklin has been cooking since he was 16. Six years ago, he brought his culinary talents to the kitchen at Rex, and since then he's earned a reputation that landed him and his team a spot in the "Got to be NC" competition dining series.

Although they were initially deemed a dark-horse, by some, because they were the only "non-restaurant" competitors, it didn't faze Conklin.

"One of my teammates, Chef Steve, said something to me at the beginning. He said, 'Look at Rex as just being a name, we're chefs just like everyone else,'" Conklin explained.

And in the end their skills paid off, getting them to the final round where they went up against a team from Curt's Cucina, an Italian restaurant in Southern Pines.

They were reportedly neck-in-neck up till the very end, when their dessert may have tipped the scales in their favor.

Fancy as it might sound, they're not far off from the healthy, fresh fare you'll find at Rex every day.

And it's not just patients and their visitors who eat there; on any given day you'll see staff members eating in the cafeteria, as well as people from outside in the community who come to buy lunch or dinner, because they say the food is just that good.

And that's what Conklin says he's committed to continuing at Rex all while hopefully changing the perception of typical hospital food.

"We just really like to cook good food and let our food do the talking for us," he said.

There are similar competitions going on in Charlotte and Winston-Salem, and the Rex team will face off against those winners this fall.

For more on the Got to Be NC Competition Dining Series visit, www.competitiondining.com.