How to prevent foodborne illnesses in your Thanksgiving meal, leftovers 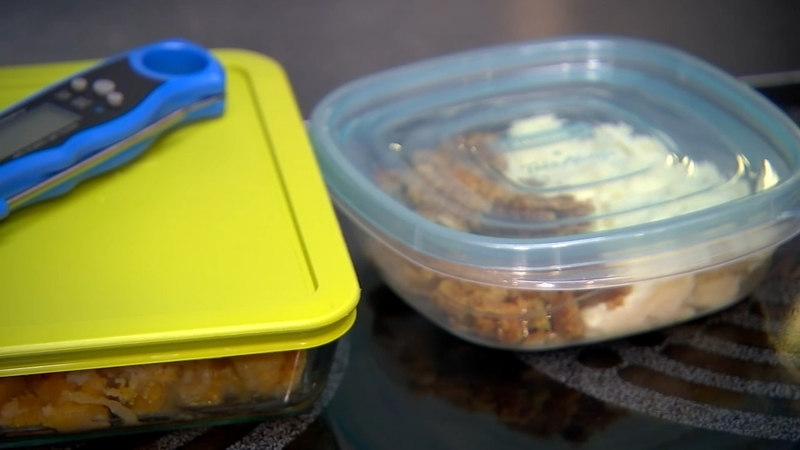 How to prevent foodborne illnesses in Thanksgiving meal, leftovers

RALEIGH (WTVD) -- Officials estimate more than 46 million turkeys will be cooked as people celebrate Thanksgiving, but there could be dangers lurking with every bite.

The USDA said millions of Americans get sick from foodborne illness each year.

The federal agency reported there have been roughly 128,000 hospitalizations and 3,000 deaths.

Many of us get ready to take the bounty of fruits and vegetables, as well as the bird, to make a beautiful meal. As we mix and mingle this holiday, it important our foods aren't doing the same.

"Salmonella can spread so easily," said UNC-REX Healthcare Executive Chef Ryan Conklin. "One of the things you have to very conscious of is cross-contamination."

ABC11 did a demo showing how the bacteria can live unknowingly in a kitchen and you'd only see it under black light.

"A lot of times when people are having company at their house they have everything on the countertops when you start to mix things together it came be pretty dangerous," said Conklin.

How to Cook a Turkey: Recipes from Butterball

Officials recommend using different cutting boards for raw and cooked items, and sanitizing utensils after ever use.

They recommend making some of the dishes a few days and reheating on the holiday.

"Use things like the instant pot and the crock pot to reheat the food and that will hold it at temperature and it clears up a lot space in the oven and on the stove time," said REX Registered Dietician Shelly Wegman.

Food storage is another things to be mindless of after Turkey Day.

"You want to put it in a shallow dish and just loosely cover it in the fridge until it starts to get cold enough and then you can cover it up entirely," said Wegman.

Those large, deep containers are apparently a no-no not only during Thanksgiving, but also while making cold weather go-to dinners such as chili.

"The temperature is going to take so long to get down to that before 40 degrees," said Wegman. "The food will go bad for quickly because of the bacterial grow and/or you could get an airborne illness."

Even how you place extras on the shelves makes a difference. Spread out the containers, don't stack it them up.

"You want to get air circulating around the food," said Wegman.